The Don’t Fear the Reaper Edition OTB Caption ContestTM is now over. 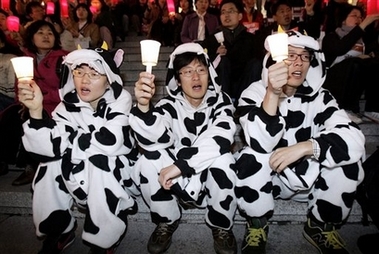 First: Mythilt – I’m sorry Chang, but I don’t think this is going to make Soylent Green any less creepy.

Second: Hodink – “Chen, that is not an udder. I’m warning you for the last time. Keep your hands to yourself.”

Third: yetanotherjohn – Desperate to get more information about North Korea’s nuclear program and recognizing the extreme danger of the mission, South Korean commandos were given a rousing send off before sneaking into North Korea. South Korean officials refused to release details of how the commandos were going to escape detection.

McGehee – Waiters from a Chinese restaurant find a unique way to encourage their customers to tip them.

DaveD – This protest is just cow-sit.

elliot – Protesting? So what’s their beef?

Anderson – North Korea’s efforts to solve its dairy shortage by dressing men as cows seemed promising, until the first milking attempt made martyrs of the cow-men and led to candlelight vigils.

charles austin – Oh, I get it, a mad cow protest. What’s the matter, was Rosie unavailable?

After his SNL appearance, Christopher Walken was plagued by fans in cow costumes wherever he went.

China attempts to acquire the appropriate jumping prowess to bolster its lunar base ambitions.

All voted for Sanjaya.

Thursday Contest is already conjuring up a solution.