Most Americans are unlikely to remember John Anderson, but he was a harbinger of things to come. 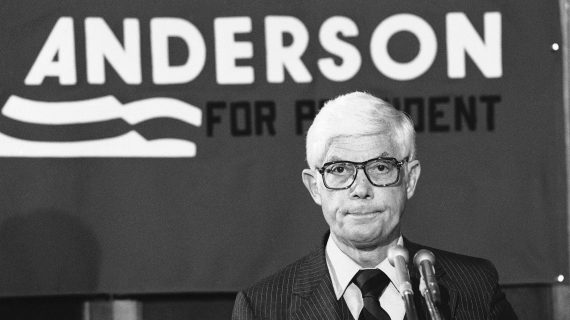 John Anderson, a former Illinois Republican Congressman who famously ran as an Independent in the 1980 Presidential Election, has died at the age of 95:

John B. Anderson, a former Republican congressman from Illinois who bolted his party to run as a plain-spoken independent candidate for president in 1980, drawing an enthusiastic if transient following among liberals and college students, died on Sunday night in Washington. He was 95.

His death was confirmed by his daughter Diane Anderson.

The United States was struggling with a recession, a severe energy crisis and the protracted Iranian hostage crisis when Mr. Anderson gave up a safe seat in the House of Representatives to seek the Republican presidential nomination. When that try fizzled, he reintroduced himself as an independent, honest-dealing alternative to the rancorous business-as-usual politics of the major parties.

For a while he had the national spotlight, a 58-year-old maverick whose white hair, horn-rimmed glasses and clearheaded presentation gave him the air of a genial professor who was not so much above the fray as he was unwilling to play by its rules.

Mr. Anderson refused to pander, telling voters in Iowa that he favored President Jimmy Carter’s embargo on grain sales to the Soviet Union after it had invaded Afghanistan. He called for a gasoline tax of 50 cents per gallon — when a gallon cost $1.15 — to save energy.

Early on, when all six of his rivals for the Republican nomination assured the Gun Owners of New Hampshire that they firmly opposed gun control legislation, Mr. Anderson said, “I don’t understand why.”

“When in this country we license people to drive automobiles,” he added, “what is so wrong about proposing that we license guns to make sure that felons and mental incompetents don’t get ahold of them?”

He was roundly booed.

His backers promoted his campaign style as “the Anderson difference,” but despite it — or perhaps because of it — he never finished better than second in a Republican primary. That came in Illinois, his home state, which he had expected to win. When he did not, losing to Ronald Reagan by fewer than 12 points (Mr. Reagan was born in Illinois), he decided to run as an independent.

Drawing support from moderate to liberal Republicans and liberal Democrats and finding a receptive audience on college campuses, Mr. Anderson did well in the polls at the start. At one point, upward of one-fifth of voters said they preferred him to the major party nominees, Mr. Reagan and Mr. Carter, the Democrat, who was seeking re-election. Mr. Anderson peaked in June, when he was the choice of 24 percent of respondents in a Gallup poll, 25 percent in a Harris/ABC poll and 18 percent in a New York Times/CBS News poll.

His hopes were sustained by the volatility of the 1980 campaign, with its sudden swings of popularity. Mr. Carter’s Democratic challenger, Senator Edward M. Kennedy of Massachusetts, led by large margins in early polls, only to see the president recover and defeat him soundly in the primaries.

Mr. Reagan, the early Republican favorite, spent money lavishly, but lost to George Bush in the Iowa caucuses and trailed in national polls before a solid win in New Hampshire put him back on the road to the nomination. Mr. Anderson said he believed that the tide might turn in his favor in “the climactic phase of the campaign.”

So he pushed on, calling Mr. Carter a “mean and evasive” campaigner who used a recession and high unemployment to fight inflation, and criticizing Mr. Reagan’s campaign “one-liners,” calling them “slick and simplistic.”

But in a pattern familiar to independent candidates, Mr. Anderson’s support drifted as voters turned to candidates who they believed could actually win the White House. On Election Day, when Mr. Reagan won in a landslide, Mr. Anderson ended up with 6.6 percent of the popular vote.

John Bayard Anderson was born on Feb. 15, 1922, in Rockford, Ill., a son of Swedish immigrants, E. Albin Anderson and the former Mabel Edna Ring. As a boy he worked in the family’s grocery store and was the valedictorian of his class at Rockford Central High School.

He earned bachelor’s and law degrees at the University of Illinois and a master of laws at Harvard. In World War II he earned four battle stars as a staff sergeant in the field artillery in Europe and later worked in the Foreign Service in Berlin and Washington, where he met Keke Machakos, a passport photographer. They married in 1953. Returning to Illinois, he was elected state’s attorney for Winnebago County in 1956.

In addition to his daughter Diane, he is survived by his wife; three other daughters, Eleanora van der Wal, Karen Moree and Susan Anderson; a son, John Jr.; and 11 grandchildren.

He left Congress so he could seek the presidency in 1980, then considered another presidential run in 1984 but ended up supporting Mr. Reagan’s Democratic challenger, Walter F. Mondale, the former vice president. He backed Ralph Nader’s third-party run in 2000 and disapproved of the Tea Party movement, telling The New Yorker in 2010, “I break out in a cold sweat at the thought that any of those people might prevail.”

Mr. Anderson had homes in Rockford as well as in Washington, where he practiced intellectual property law, and in Fort Lauderdale, Fla., where he taught law for many years at Nova Southeastern University. He served as president of the World Federalist Association, which promotes international cooperation, and chairman of FairVote, a nonprofit group that favors ranked-choice voting.

Mr. Anderson was the author of “Between Two Worlds: A Congressman’s Choice” (1970); “The American Economy We Need” (1984) and “A Proper Institution: Guaranteeing Televised Presidential Debates” (1988).

The most enduring impact of his 1980 independent campaign came in the courts, where his victories enabled later third-party candidates like H. Ross Perot and Mr. Nader to get on the ballot. Most important was a ruling by the United States Supreme Court in 1983 that threw out Ohio’s filing deadline of March 20 for independent candidates. (Mr. Anderson had not decided to run as an independent that early in 1980, but got on the ballot when a Federal District Court ordered Ohio to let him run.)

Ohio defended its deadline as a way to maintain “political stability.” But the Supreme Court accepted Mr. Anderson’s argument that states could not impose substantially more onerous burdens on independent candidates than on major party nominees.

Though Mr. Anderson’s candidacy had little impact on the outcome of the 1980 election, his campaign was memorable for its candor. Appearing in Des Moines with six rivals for the Republican nomination, Mr. Anderson was alone among them in saying something specific when asked if there was anything in his career he would take back if he could.

“It would have been the vote that I cast in favor of the Gulf of Tonkin resolution,” he said, referring to the 1964 congressional measure that gave President Lyndon B. Johnson license to widen the war against North Vietnam.

Anderson ended up getting about 6.6% of the popular vote in the 1980 election but didn’t have any significant impact on the outcome of the election in the Electoral College, which was effectively a landslide in favor of Ronald Reagan and making Carter one of only four 20th Century Presidents to lose a re-election bid in the General Election. His most notable impact on the race came when he appeared in a televised debate alongside Reagan. President Carter had refused to participate in any debate that Anderson was invited to, so the two men were on stage alone and, in the end, most observers at the time and since then have said that the debate ended up doing more good for Reagan than it did for Anderson since it helped to resolve many of the public doubts about whether Reagan was suitable to replace Carter in the White House. After that debate, polling began to move decidedly in Reagan’s favor and his eventual victory became even more apparent after Reagan and Carter debated on their own just days prior to the election. As for Anderson, he mostly disappeared into private life after the election, although he did make a few appearances on political news shows in subsequent years. Nonetheless, his ability to get on the ballot in 1980, and the legal victories his campaign won in doing so, helped other third-party candidates such as Ross Perot, Ralph Nader, and Libertarian and Green Parties in the years that followed.

Anderson was also part of a breed of Republicans that were ultimately headed for relative extinction, the moderate and often even liberal by contemporary political standards Republican. For decades, the Republican Party was dominated by people like Anderson due in no small part that it still maintained its strongest support in the Northeastern and Midwestern United States, the areas where it had originated from in the years before Abraham Lincoln became President in 1860. In more recent years, the party had also come to predominate in large parts of the Mountain West and on the West Coast but even there the type of Republican we saw was more likely to be like Dwight Eisenhower than Barry Goldwater. The conservative movement as it came to be known was still in its infancy when Anderson entered Congress after the 1960 election and had suffered a significant setback with the historic failure of Barry Goldwater’s 1964 campaign against Lyndon Johnson. At first, the GOP was able to maintain a balance between moderates like Anderson and the growing conservative movement. Indeed, in 1978 Reagan himself campaigned for Charles Percy, one of the most liberal Republicans in the Senate notwithstanding the disagreements with the two. Reagan also worked closely with Bob Michael, who served as House Minority Leader throughout his Presidency and retired just before Republicans took back control of the House in the 1994 elections. In the wake of those 1994 elections, moderate Republicans began to die out, though, and they were replaced not by other Republicans but by Democrats as the GOP chose to concentrate its resources in the fast-growing southern part of the United States, something that both made the party more conservative and resulted in the beginning of a process that changed the very nature of “conservatism” from the intellectual movement it had been under men like Reagan, William F. Buckley Jr, and Barry Goldwater. What we have today is “conservative” in name only and instead something more akin to blind rage populism dominated by the Tea Party, Steve Bannon, and Donald Trump. In many ways, then, Anderson’s 1980 campaign was the beginning of the last gasp of the moderate to liberal GOP that had emerged after the Second World War. What has succeeded it leaves a lot to be desired.