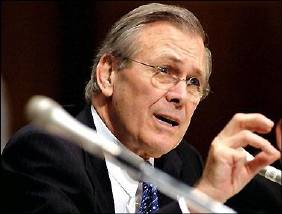 1st April with, “Our intelligence sources have confirmed that Saddam does, in fact, have a dick this small…”

2nd Nan with, “With a snap of his fingers, Secretary of Defense Donald Rumsfeld demonstrates how long he estimates the French would have lasted in Iraq.”

3rd Romulus with, “You are this close to being throw[n] out on your ass if you make another idiotic political statement disguised as a question.”

Thanks for all the good entries. Another contest will be forthcoming soon.