The I’m Just a Sweat Transvestite Edition OTB Caption ContestTM is now over. 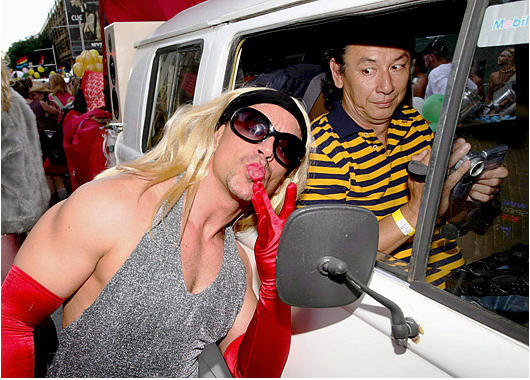 First: McGehee – “Didn’t I see you in Blokeback Mountain?”

Third: FormerHostage – Caution: Objects in the mirror may be closer than they appear…they may also have a penis.

Ingress – “Since you asked, buddy, I’m thinking you look more like Katherine Harris than Marilyn Monroe.”

FreakyBoy – Although he announced his resignation from 60 Minutes, Mike Wallace will continue working for CBS News. Seen here at a Sydney Gay Pride Festival with camcorder in hand, Wallace described his new job as “traveling the world to report on things that interest me.”

Will Franklin – Jose Canseco, undercover, working on yet another tell-all book, fools even Hideki Matsui’s nosy mooch of an uncle.

the Pirate – Barry Bonds loses his crown as ugliest woman ever.

Australian for — “Down Under”

Wong had thought of “Do you wanna Drag?” with different connotations

Warning: Objects in Rear are Closer Than They Appear.

The Monday contest is already feeling your pain.