Today’s WaPo has a short feature on Clear Cards, whereby travelers get to bypass TSA security lines at select airports for a small fee.

Heres how it works: Fliers undergo a Transportation Security Administration background check and have personal data, plus iris and fingerprint scans, put on a card. Although the fliers still have to remove their shoes and get carry-ons X-rayed, at certain airports the cards let them skip the lines that everyone else endures.

As of Wednesday, 3,500 Washington area travelers had signed up for a Clear card, which costs $128 a year.

My wife and I flew out of Reagan Thursday afternoon and noticed the new lines which, for now at least, are noticeably shorter. Given that we fly quite often and can afford the $128 we’ll almost certainly get them, although enough people in the DC area fit that description that I wouldn’t be surprised if the standard lines don’t soon become shorter.

It is, however, a questionable concept. The government requires that people give up their 4th Amendment rights against unreasonable searches in order to fly on commercial airlines on the grounds that they have no idea which of us are potentially terrorists. The government then charges a fee to allow people to prove that they’re not criminals and skip part of the line. There’s something vaguely un-American about this.

This is compounded by the fact that the government doesn’t allow people with military ID or who otherwise have actual security clearances to bypass said lines, which leads me to think that this is about collecting the $128 rather than ensuring security. That view is enhanced by the fact that no security check that could be accomplished for $128 will do anything other than demonstrate that the person in question is not a wanted felon or on a terrorist watch list. That’s a screening that all of the 9/11 hijackers would have passed. 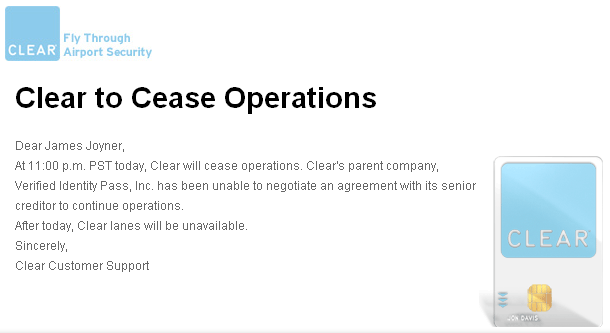