The folks at Piled Higher and Deeper reflect on the distribution of salaries on campus:

None of this is surprising, of course, although it is both amusing and shocking in graphical form.   (Although grad students are making a whole lot more than they did in my day!) As I noted quite some back in a piece for TCS Daily, “Crimson with Envy: Why Nick Saban Makes More Than Your Kid’s Teacher,” the distribution is explainable by rather basic economics.

The supply of qualified PhDs is high while the supply of tenure-track jobs at PhD granting institutions is low.  Indeed, the average untenured professor salary of nearly $70,000 is probably higher than it should be and there really shouldn’t be such a thing as a tenured professor, let alone one making that much more than a freshly minted PhD.  Further, with few exceptions, hiring and retaining a superstar professor does little for the institution’s bottom line.

Conversely, there are only 128-odd Division I head football coaching jobs.  Luring one of the handful of them who is a proven winner can make a huge difference.  Indeed, the Saban piece has proven prescient, in that he has, in less than eighteen months, transformed Alabama’s program from a washed-up relic into a national championship contender.  Given what that can mean for the institution, he’s underpaid at $4 million.  (Thankfully for the Sabans, he has some side income to help him feed his family.) 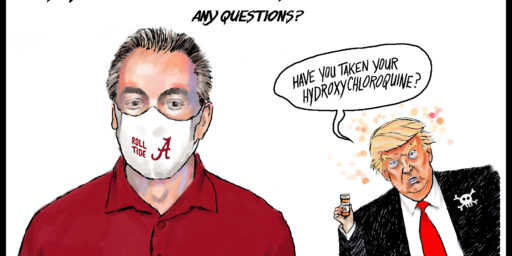