Congress is banding together on a bipartisan basis to fight the greatest problem facing the country: the precedence of the Distinguished Warfare Medal above the Bronze Star. 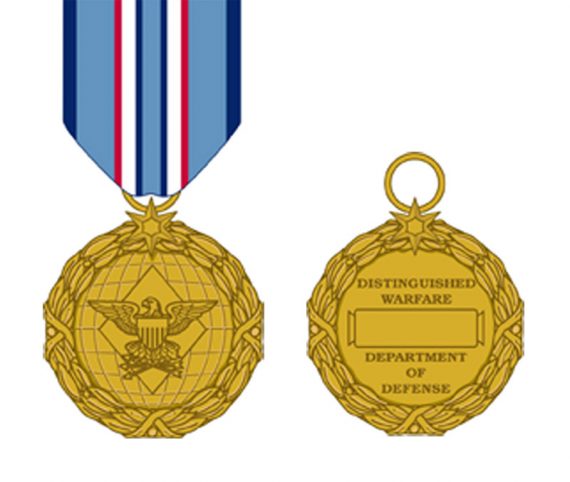 Congress is banding together on a bipartisan basis to fight the greatest problem facing the country: the precedence of the Distinguished Warfare Medal above the Bronze Star.

The medal, announced last month, is intended to recognize troops who contribute to the war on terrorism but who are not in the line of fire.

The problem, according to a growing number of veterans groups, lawmakers, and outraged military-philes, is that among the pecking order of service medals, the Pentagon has decided to rank the new drone medal directly below the Distinguished Flying Cross, making it the seventh-highest ranking medal, far higher than the lowest-ranking combat medals awarded to troops who actually put their lives on the line, including the Bronze Star and Purple Heart, for those wounded in action.

“We lessen the direct-combat recognitions of the Purple Heart and Bronze Star by giving the DWM higher precedence,” said Rep. Susan Davis (D-CA), ranking member of the House Armed Services Subcommittee on Military Personnel, in a statement on Tuesday. “Secretary Hagel should take a hard look at this and make an adjustment in precedence.”

Pentagon press secretary George Little and Col. Steve Warren, DOD press operations director, already have acknowledged that the Pentagon is hearing the complaints, but insist a lot of thinking went into where to rank the medal. To get the medal requires the approval of a service secretary, a very high requirement that they say means the drone warfare award won’t be handed out lightly.

The lawmakers of this week’s sign-on letter say they applaud the intent of the medal, just not its placement among other medals. They call it “a disservice to Purple Heart recipients.” To receive Bronze Star, they note, a service member is required to be serving in “an imminent danger area. No such requirement exist for the DWM.”

As I noted in my post “Distinguished Warfare Medal for Armchair Warriors,” ranking the award above the Bronze Star rankles the sensibilities of those who’ve served, although mostly because they misunderstand the awards system. That is, the Bronze Star was never intended to be a very exalted award and has in fact been awarded quite generously. And the Distinguished Flying Cross—which the Distinguished Warfare Medal would actually be equivalent to, ranking below it in precedence only by virtue of being newer—has long been awarded reasons other than valor in all services but the Army. (Indeed, I didn’t realize the latter until I researched the post.)

My guess, though, is that the backlash will be heeded and the award downgraded to Bronze Star-equivalent which, again, would therefore put it lower in precedence because it’s a newer award.