The Danish government and a leading newspaper are apologizing to Muslims who have been offended by editorial cartoons published in said newspaper that imply that some Muslims are violent.

Aljazeera reports it this way:

Denmark has warned its citizens to avoid Saudi Arabia after Muslim fury mounted over newspaper cartoons of the Prophet Muhammad. Denmark’s Jyllands-Posten newspaper, which published the cartoons, issued an apology late on Monday in a statement to Arab countries, sent to the Jordanian news agency Petra.

The drawings, which seemed to portray the prophet as a terrorist, were published in September, but the row erupted this month after diplomatic efforts to solve the issue failed. One drawing shows Prophet Muhammad wearing a turban shaped as a bomb.

Muslims deem images of prophets disrespectful and caricatures blasphemous, and some have threatened Danes and demanded an apology.

The newspaper said in a statement: “The drawings are not against the Danish law but have indisputably insulted many Muslims, for which we shall apologise.”

Michelle Malkin, Mark Moore, Gaijin Biker, and others have reproduced the images.

My favorite two are these: 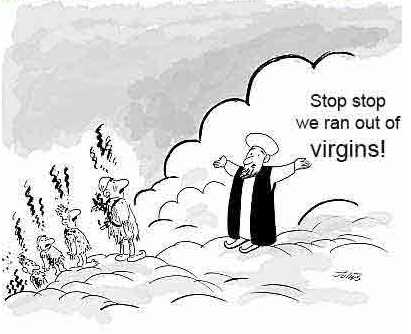 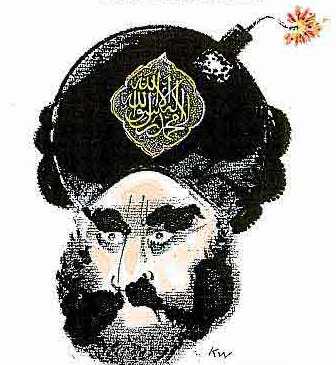 The irony is that the protestors aren’t just mad at the suggestion that Mohammed, who supported murder as a political tool, would support the terrorists. They’re mad that Mohammed is in a cartoon, period.

Not to mention the fact that they are rioting to demonstrate how peaceful they are.