Reacting to news that DC Mayor Adrian Fenty has ordered taxis to install meters, thus overturning the bizarre “zone” system unique to the District, Ezra Klein observes that this will have a profound effect in his daily life second only to the recent smoking ban for DC bars.

Local politics matters! And yet I spend all my time arguing for an expansion of health coverage that I already have, and an end to a war I’m in no danger of fighting. It’s weird.

Commenter Henry Evans cynically observes, “It’s not that weird. Your probability of having an impact on an actual policy outcome is so low that you might as well allocate your time based on your tastes rather than the impact of policies on you.”

My initial instinct was to agree but, in reality, we’re a lot more likely to have an impact on local politics than national, owing to both the numbers and the relative lack of big lobbying money working against us. School boards, utility commissions, zoning regulators, municipal councils, and others are far more likely to impact our daily lives and yet most of us are far more interested in national issues that have only theoretical impact on us. (To be sure, most people aren’t interested in politics, local or national, at all.)

The only explanation that comes to mind is that most of us interact with politics through the mass media and the national version does a better job at creating a sense of drama. It’s the difference between a high school talent show and “American Idol” or between community theater and Broadway. 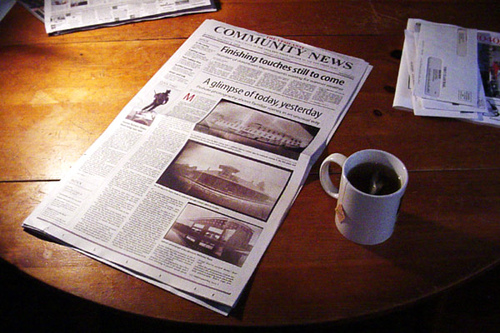 Newspapers Writing for Selves, Not Readers?