The press coverage of the Democrats’ answer to the Bush administration’s call for enhanced domestic wiretapping authority is rather confusing. Pam Hess, until recently with UPI but now with AP, makes it seem like a rather sharp rebuke to Bush:

The Justice Department would have to reveal to Congress the details of all electronic surveillance conducted without court orders since Sept. 11, 2001, including the so-called Terrorist Surveillance Program, if a new Democratic wiretapping bill is approved.

The draft bill, scheduled to be introduced to Congress Tuesday, would also require the Justice Department to maintain a database of all Americans subjected to government eavesdropping without a court order, including whether their names have been revealed to other government agencies. The Bush administration has refused to share that information with Congress so far. The Terrorist Surveillance Program was a secret eavesdropping program undertaken after the Sept. 11 terrorist attacks without the approval of an intelligence court created 30 years ago to monitor such programs.

The Democratic legislation is certain to draw sharp objections and possibly a veto threat because it lacks at least one feature the White House demands: it does not grant retroactive legal immunity to telecommunications companies that cooperated with government surveillance between 2001 and 2007 without the court orders. Around 40 lawsuits name telecommunications companies for alleged violations of wiretapping laws, according to administration officials.

Eric Lichtblau and Carl Hulse, writing for the NYT, seem less sure. Indeed, they’ve written two drafts, both of which are currently online. One, “Democrats Seem Ready to Extend Wiretap Powers,” is rather bland but seems to suggest this is a win for Bush:

Two months after insisting that they would roll back broad eavesdropping powers won by the Bush administration, Democrats in Congress appear ready to make concessions that could extend some crucial powers given to the National Security Agency.

Administration officials say they are confident they will win approval of the broadened authority that they secured temporarily in August as Congress rushed toward recess. Some Democratic officials concede that they may not come up with enough votes to stop approval.

As the debate over the eavesdropping powers of the National Security Agency begins anew this week, the emerging measures reflect the reality confronting the Democrats. Although willing to oppose the White House on the Iraq war, they remain nervous that they will be called soft on terrorism if they insist on strict curbs on gathering intelligence.

A Democratic bill to be proposed on Tuesday in the House would maintain for several years the type of broad, blanket authority for N.S.A. eavesdropping that the administration secured in August for six months. In an acknowledgment of concerns over civil liberties, the bill would require a more active role by the special foreign intelligence court that oversees the interception of foreign-based communications by the security agency.

A competing proposal in the Senate, still being drafted, may be even closer in line with the administration plan, with the possibility of including retroactive immunity for telecommunications utilities that participated in the once-secret program to eavesdrop without court warrants.

No one is willing to predict with certainty how the question will play out. Some Congressional officials and others monitoring the debate said the final result might not be much different from the result in August, despite the Democrats’ insistence that they would not let stand the extension of the powers.

“Many members continue to fear that if they don’t support whatever the president asks for, they’ll be perceived as soft on terrorism,” said William Banks, a professor who specializes in terrorism and national security law at Syracuse University and who has written extensively on federal wiretapping laws.

The other version, “Democratic Concessions Are Expected on Wiretapping,” is even stronger, with some subtle changes to the opening language in addition to the bolder headline.

Two months after vowing to roll back broad new wiretapping powers won by the Bush administration, Congressional Democrats appear ready to make concessions that could extend some of the key powers granted to the National Security Agency.

Bush administration officials say they are confident they will win approval of the broadened wiretapping authority that they secured temporarily in August as Congress rushed toward recess, and some Democratic officials admit that they may not come up with the votes to rein in the administration.

As the debate over the N.S.A.’s wiretapping powers begins anew this week, the emerging legislation reflects the political reality confronting the Democrats. While they are willing to oppose the White House on the conduct of the war in Iraq, they remain nervous that they will be labeled as soft on terrorism if they insist on strict curbs on intelligence gathering.

WaPo has yet to weigh in, relying on Hess’ wire copy and the LA Times has nothing at all. Regardless, there’s still House-Senate reconciliation to be done and President Bush has the threat of the veto to further help shape the legislation in his direction.

Steven Taylor has a lengthy analysis of what he terms “Congressional Kabuki” and argues that the Democrats face more trouble than being accused on being soft on terrorism.

Politically I am aware that being “soft on terrorism” could be problematic for the party, but by the same token one would think that their lack of fight on a panoply of issues, from the conduct of the war to questions about “coercive interrogations” to domestic intelligence gathering (to name three), would depress the enthusiasm of their core constituency and undercut their appeal to moderates who are unhappy with the GOP on the above listed issues. On all of these topics there is much squawking, yet ultimately very little action. It is as if they are more interested in the political issue than they are in actually, well, doing something about issues that supposedly upset them greatly.

One would think that congressional leadership would recognize that part of the reason that they have been experiencing such low popularity ratings is that they really haven’t behaved all that differently (in terms of results) than did the GOP when they were in control.

It’s really the classic damned if they do, damned if they don’t scenario. Either way, someone will think they’re weak. I’d agree that standing on principle and thus appealing to at least their base would be the smarter move.

Once again, though, those who argue, as George Wallace famously said, there’s not a dime’s worth of difference between the national Democratic and Republican parties, are given more ammunition. Despite the incredibly heated and polarized rhetoric we’ve become accustomed to, we’re really arguing about niggling changes in policy. Which makes calls for impeachment and war crimes trials and all the rest even more laughable. 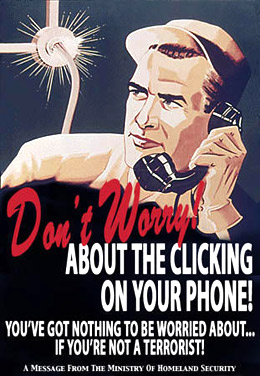 It’s About More Than Cell Phone Records, It’s About Liberty