Michael Yon’s latest dispatch from Iraq carries an update on LTC Erik Kurilla’s recovery and the progress his team made in Mosul.

As the Deuce Four heads home this week, they leave behind a Mosul that, while not yet in the clear, is much closer to security and prosperity than anyone would have considered possible eight months ago. In between the daily secret reports Kurilla has brought to his hospital room so he can track his battalion, the Commander watches television news, increasingly frustrated by what he sees as a clear, and inaccurate, negative bias. “When you get the news back here in the states, it’s all doom and body counts. I only wish the American public could see the incredible progress that is being made every day in Iraq, particularly in places like Mosul.”

The account of the battle that led to Kurilla’s injuries is here.

Yon is an independent journalist in Iraq and is financed by private donations. If you’re inclined to send him your support, there’s a link at his site. 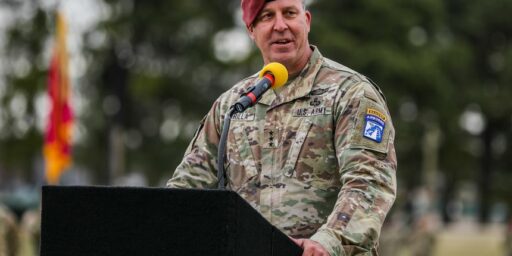 The Third And Thankfully Last Presidential Debate of 2016