Advances is the field of astronomy have led to the discovery of thousands of objects similar to Pluto, once again calling into question its status as the 9th planet in the Solar System.

A chunk of rock and ice that may be a planet has been discovered in the farthest reaches of the solar system, astronomers announced Friday. The object, currently called 2003 UB313, orbits the sun and is larger than Pluto, traditionally considered the ninth planet in the solar system. The news came hot on the heels of the announcement of the discovery of a separate planet-like object at the edge of the solar system (see “New Pluto-Size Object Discovered in Solar System“)Ã¢€”and amid fears that a rogue astronomer may been attempting to announce the UB313 discovery as his or her own.

The discovery of UB313 is likely to reignite the debate over the definition of “planet”Ã¢€”and over how many objects in the solar system are deserving of the name. The sequence of events surrounding the UB313 announcement may also change how such objects are announced in the future, according to Brian Marsden, director of the International Astronomical Union’s Minor Planet Center in Cambridge, Massachusetts.

UB313 is being called a scattered disk object or an extreme member of the Kuiper belt. The belt is a ring of icy debris that floats on the fringes of the solar system beyond Neptune. The object is currently about 97 times farther from the sun than Earth is, or about three times farther from the sun than Pluto. Its orbit is more eccentric than Pluto’s, taking it from 38 to 97 times the sun-Earth distance over a 560-year period.

UB313 is the farthest known object in the solar systemÃ¢€”even further than Sedna, a planetoid discovered nearly two years ago (see “New Planetoid Found in Solar SystemÃ¢€”Most Distant Yet“). The newfound object is also among the five brightest Kuiper belt objects, as seen from Earth.

The sheer size of the object means that it can only be classified as a planet, according to Mike Brown, an astronomer at the California Institute of Technology in Pasadena, who announced the object’s discovery. Brown made the discovery with Chad Trujillo of the Gemini Observatory on the Mauna Kea volcano in Hawaii, and David Rabinowitz of Yale University in New Haven, Connecticut. The team had originally planned to report the discovery of UB313 in October after more detailed observations. But they decided on an early announcement after it became clear that savvy Web users couldÃ¢€”if they were so inclinedÃ¢€”track down UB313 observation data online and use it to claim the discovery as their own, Marsden said.

The discovery of a new planet in our Solar System could have an unintended consequence – the elimination of Pluto in the list of planets everyone has in their heads. Is it time to wave this distant, cold, dark piece of rock farewell?

To the casual observer, the announcement that scientists have identified a tenth planet orbiting the Sun is primarily of importance to few people other than science teachers and schoolchildren.
But, on closer examination, the revelation may have more far-reaching consequences for the way in which we think about space.

At around 3,000km across, 2003 UB313 – as it has been named – is the largest object found in our Solar System since the discovery of Neptune in 1846. And it is thought to be larger than Pluto, whose status as the furthest planet from the Sun has been enshrined in accepted thought since it was identified in 1930. But this could all change. Technological advances have enabled astronomers to find more minor planets, stars, asteroids and comets.

And in the late 1960s scientists found that Pluto’s size had been over-estimated. It was first thought to be around as large as Earth, whereas accepted thought now suggests that the planet’s mass is only around a fifth of the moon’s. “Today, the world knows that Pluto is not unique. There are other Plutos, just farther out in the Solar System where they are a little harder to find,” says David Rabinowitz of Yale University, who was among the astronomers who discovered 2003 UB313 two years ago.

His point is echoed by Professor Mark Bailey, director of Armagh Observatory in Northern Ireland. “Increasingly, objects are far away and there are objects which are of comparable size to Pluto, so if you think of Pluto as a planet then you should refer to those objects as planets,” he says. He estimates that there could be tens of thousands of objects beyond Neptune in the Solar System region known as the Kuiper belt, many of which may be larger than Pluto.

It is widely accepted that the struggle to provide an adequate definition of a planet is the crux of the problem. “Originally a planet was a wandering star. Then it was something that moved across the sky. Then it was something that revolved around the Sun. The criterion should be ‘something that is changing over time’,” says Prof Bailey. “I’m sure we will continue to discover more and more objects of comparable size which will continue to challenge established thought about planets.”

Dr Brian Marsden, director of the International Astronomy Union’s minor planet centre, believes the simplest way to resolve the confusion is to reject Pluto’s claim to being a planet on the grounds that “size does matter”. Instead he says people should accept that “we have eight planets and only an object bigger than Mars could be considered to be a planet in the future”.

One wouldn’t think that changing the definition of “planet” would be the way to go here, but I suppose it would be asking too much of our schoolchildren to memorize the names of thousands of planets–let alone trying to capture all of them in a shadowbox. 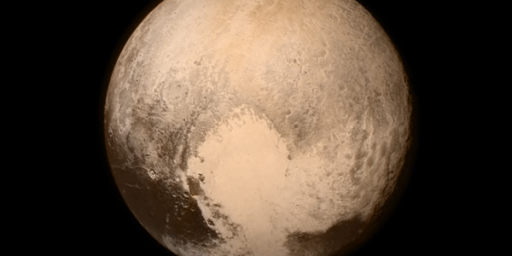