Thirty four years later, Egyptians are hinting they want to make changes to the first peace treaty between Israel and an Arab nation. 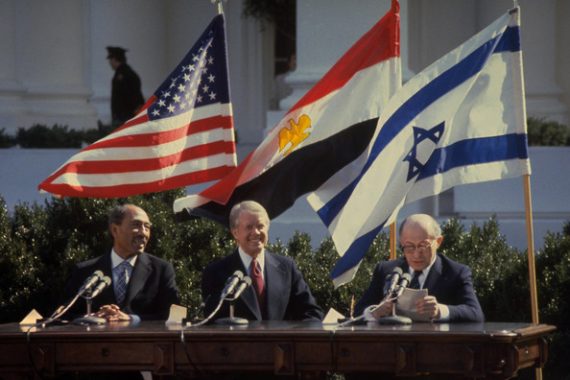 An adviser to Egyptian President Mohamed Morsi says that the nation will seek to amend provisions of the thirty-four year old Camp David Accords:

In comments published in the online Dostor newspaper, one of Egypt’s independent dailies, a Morsi adviser, Mohammed Seif el-Dawla, was quoted as saying he will soon give the president a proposal on amending the treaty between Egypt and Israel.

El-Dawla provided no details of the proposal, which he said would be drawn up by a panel of consultants. Amending the treaty, he said, was ”a popular demand and a strategic and security need.”

Hossam Sweilam, a former Egyptian general and military analyst, said such proposals are politically motivated and meant to play to nationalist sentiments. He noted that Egypt has already worked with Israel to boost troop levels in Sinai.

Egypt ”got what (it) wanted and there was no objection from Israel,” he said. Egypt now has more than 2,200 soldiers in the demilitarized area, along with military helicopters and mechanized brigades

This is all apparently motivated by the increasing unrest in the Sinai Peninsula, which has become something of a haven for militant groups since the fall of the Mubarak regime. There have been several incidents lately that have resulted in the death of Egyptian police and at least part of the issue seems to be the provisions of the treaty where Egypt to agreed to limit the military forces it would keep in Sinai when it signed the treated in 1978. There is still a multinational peacekeeping force in the desert, but there ability to control matters such as this is limited under the provisions of the treaty.  For their part, the Israelis are saying that they would not agree to any changes in the treaty, which one can certainly understand. The relationship between Israel and Egypt in the wake of the fall of the Mubarak regime is unclear to say the very least, not the least because Israel is understandably concerned about the intentions of a nation led by the former head of the Muslim Brotherhood, an organization that continues to refuse to recognize that the State of Israel exists. At the same time, an unstable Sinai peninsula is as much of a security threat to Israel as it is to Egypt since it makes it more likely that terrorists would be easily be able to slip in to Gaza, or Israel itself.

Ideally, the solution would be for the Egyptian government to get control of the militant situation itself while at the same time reaffirming its commitment to the accords and the security of the peace between Israel and Egypt. This is one area where the United States and the West can have influence, because Morsi is very much interested in obtaining Western loans and aid for his nation. If he wants to play that game, then perhaps we need  to make clear to him that there’s going to be a price to pay on his end, and it’s not even a very high price. Indeed, avoiding conflict and increased tensions with Israel would seem to be in the best interests of Egypt itself.