If the United States and Egypt were Facebook friends, their relationship status would be "It's Complicated." 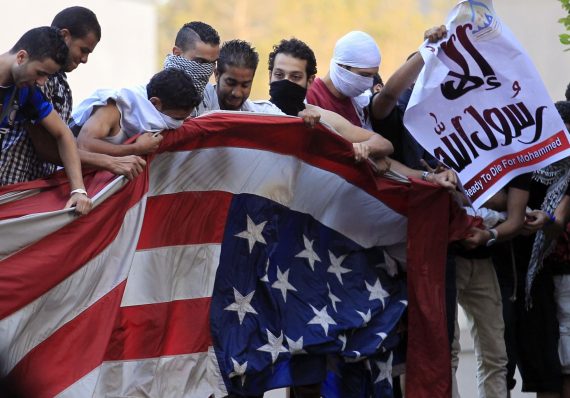 James Joyner touched upon the kerfuffle that arose yesterday after comments that President Obama had made in response to a question asking whether or not Egypt was still an ally, comments that were quickly “clarified” by appropriate authorities back in Washington. As someone mentioned in the comments to James’s thread, Obama’s original comment is the classic example of a “Kinsey Gaffe,” which occurs when a politician inadvertently speaks the truth. In this case, President Obama pointed out the rather obvious fact that, with the rise to power of Mohammed Morsi and the Muslim Brotherhood, the relationship between the United States and Egypt is not nearly as certain as it was in the days when the country was ruled by Hosni Mubarak and his cadre of military officers. This isn’t surprising. After all, it’s easier to maintain friendly relations with a dictator than it was a “messy” fledgling democracy that is ruled by a civilian leadership that has anti-Western elements to it while it’s also competing for power with a military clearly eager to maintain its place in Egyptian society. It’s also not surprising that the State Department felt it necessary to walk back the President’s comments given the sensitive nature of our relationship with Cairo at the moment, especially given the developments of the past several days.

Over at Commentary, Max Boot points out that the current status, and the future, of our relationship with Egypt is far from clear:

The events of the past few days show just how hard it is to determine the future course of Egyptian policy: Morsi did not grant enough police protection to the U.S. embassy to prevent demonstrators from getting inside the grounds and he was halting and late in condemning the attack. His hesitancy stands in contrast to the prompt, full-throated condemnations from Libyan leaders-who are genuinely pro-American-of the attack which killed our ambassador in Benghazi. Morsi has been a little tougher in his language and actions today but only after a telephone conversation with Obama that had to be uncomfortable for both of them.

Like most politicians, Morsi appears to be triangulating between competing demands-in this case the demands of the U.S., which holds Egypt’s purse strings, and the demands of hard-line Salafists and Muslim Brothers. Morsi’s own views are unclear, perhaps conveniently cloaked for the time being. To make matters more complicated, it is unclear to what extent Morsi controls his own security forces even after having replaced many of the senior generals. There is even a conspiracy theory floating around that the security men might be tacitly cooperating with the Salafists to embarrass Morsi.

NBC’s International reporter Richard Engel, who was present for pretty much all of the major events of the Arab Spring in Egypt and elsewhere, had this reaction to President Obama’s comment when he appeared on The Daily Rundown yesterday morning:

TODD: I just want to get your first reaction, before you give me a report, of the President saying Egypt was not an ally or an enemy.

ENGEL: Yeah, I almost had to sit down when I heard that.  For the last forty years, the United States has had two main allies in the Middle East — Saudi Arabia and Egypt, the other ally in the Middle East being Israel.  For the President to come out and say, well, he’s not exactly sure if Egypt is an ally any more but it’s not an enemy, that is a significant change in the perspective of Washington toward this country, the biggest country in the Arab world.  It makes one wonder, well, was it worth it?  Was it worth supporting the Arab Spring, supporting the demonstrations here in Tahrir Square, when now in Tahrir Square there are clashes going on behind me right in front of the US embassy?

You can see now teargas coming — teargas being fired into a crowd of demonstrators who are trying to get close to the embassy, which is at the end of the street, and throw rocks at the US embassy.  A very different scene here, a very different Egypt before, when the United States — President Obama — was supporting the demonstrators, President Mubarak was in power, and Egypt was very much an ally.  The President doesn’t seem to be sure if Egypt is an ally any more, and some demonstrators who the Arab Spring helped give a voice to are trying to attack the US embassy.

Who lost Egypt? Barack Obama.  His administration waited eight whole days when those demonstrations erupted to demand Mubarak’s ouster, and then insisted on immediate elections — even though the only opposition organized well enough at that point in time for elections was the radical Muslim Brotherhood.  In both Egypt and even more in Libya — where Obama applied military force to dislodge and topple Moammar Qaddafi — the White House left power vacuums that allowed the most radical elements to seize control.  Critics of Obama’s policies in both regards warned of this very outcome eighteen months ago, to no avail.

I’ve addressed the  ”Who Lost Egypt?” argument before, and I find the conservative position here to be just as simplistic and unrealistic now as it has been in the past. It essentially boils down to the idea, expressed mostly by the Neo-Conservative wing of the Republican Party, that the United States was solely responsible for the downfall of Hosni Mubarak in February 2011, and that there is something we could have done that would have kept him in power any longer than the crowds that were gathering in Tahrir Square and on the streets of other major cities such as Alexandria. As I noted when I first addressed this question, the entire argument simply defies common sense:

The entire “Who Lost Egypt?” argument also suffers from the fact that it simply doesn’t comport with the facts. When the Egyptian protests started in mid-January the initial response from the White House was rather muted. Instead of saying the Mubarak should step aside, the Obama Administration was calling on him to reform and to listen to the voices of the Egyptian people. Instead of doing that, however, Mubarak continued responding with ever-increasing force, and the protests quickly moved from general expressions of discontent to outright calls for an end to Mubarak’s rule. At the same time, while the U.S. was apparently trying to influence Mubarak behind the scenes, it was staying relatively quiet publicly, a strategy which caused discontent among the Egyptian protesters who were coming to see the United States as allied with the man who was trying to kill them, as well as attacking them with tear gas made in the United States. It wasn’t until early February, when Mubarak’s days were clearly already numbered, that the U.S. began calling on Mubarak publicly to prepare for a transition to civilian rule. The final resolution of the crisis, with Mubarak at first saying he would stay in power until new elections were held in September and then him stepping down completely when the Egyptian people rejected even that option and the military finally realized that maintaining the Mubarak regime was impossible, happened largely without American intervention.

The idea that there was much of anything that the United States either could have, or should have, done during the Egyptian protests that would have kept Mubarak in power any longer ignores all of the available evidence. The protesters in Tahrir Square and in other cities in Egypt had made clear that they would not negotiate with anyone — not the military, not Egypt’s new Vice-President (a Mubarak crony) — until Mubarak himself had stepped aside as early as the end of January. Nothing Mubarak did persuaded them to leave the protests. Much like the downfall of Nicolae Ceacescu in Romania, the crowds were not going to leave until the dictator had left. The idea that we could have controlled that process is absurd, and the suggestion that we should have stood aside and let Mubarak brutally repress this rebellion is, quite honestly, an insult to American decency.

There comes a point in the lifetime of every authoritarian leader when the illusion that kept them in power dies and they lose the support of the people. It happened to Ferdinand Marcos in 1986. It happened to Nicolae Ceaucescu in 1989. And, it happened to Hosni Mubarak in February 2011. The reason that he was pushed out isn’t because Barack Obama made a phone call, it’s because the military leadership realized that, if  he stayed in power, the protests would escalate, civil order would continue to disintegrate, and they’d start losing control of their own soldiers, many of whom came form the same part of Egyptian society as the people who they would potentially have been ordered to shoot down. Admittedly, it does appear that U.S. officials played a role in encouraging Mubarak to step down before there was further bloodshed, but at that point it was rather obvious that his fate was inevitable, and trying to save a few lives strikes me as a rather noble goal. When Mubarak fled to his luxurious home on the Red Sea (paid for by dollars plundered from the Egyptian people), we had no idea what the future of Egypt would be, but it had become clear by early February 2011 that Hosni Mubarak would be part of that future.

Obviously, current developments in Egypt are moving in a troublesome direction. President Morsi appears to be unable to figure out whether he wants to be the leader of a united Egypt, or the agent of the Muslim Brotherhood.The more radical elements of his party’s coalition are clearly trying to push him in a more radical direction. As noted above, these embassy protests may be more about the power struggles inside Morsi’s coalition than anything else. Whether we like it or not, all of this is a huge concern for the United States because we’re dealing with the most populous nation in the Middle East, and a nation that has, for a long time, been seen as the guidepost for the rest of Arabian culture. It sits on a border with Israel that has been at best for 35 years but which has suddenly become the focus of attacks by unknown radical focus. With the conflict in Syria still unresolved, the idea of an unstable Egypt would be a concern for Israel and everyone else in the Middle East.

So, the President was correct, if perhaps impolitic, to state that our relationship with Egypt is complicated. How it resolves itself is a very difficult question to answer.