Sherman Frederick, publisher of the Las Vegas Review Journal, is going out on a limb to predict that Senate Minority Leader Harry Reid will lose his re-election bid. In 2010.

In 50-plus months, Nevada voters will march to the polls and replace Sen. Harry Reid, thus ending one of the longer, more powerful political runs in state history. When it happens, political wiseguys will remember that Sen. Reid’s undoing came early in his last term when he became a big shot in the Democratic Party and quickly morphed into someone Nevada voters did not recognize — his political girlfriend in the House, uber-liberal Rep. Nancy Pelosi of California.

A good line. But predicting an election more than 50 months down the road? Rather silly, no?

. . . I find Harry, as an individual, magnetic — by that I mean I am very attracted to one side of him and very repulsed by the other. For example, I have hiked the desert with “blue jeans” Harry and listened to him passionately expound the virtues of mining, advocate appropriate wilderness areas and unashamedly defend the absolute need for putting federally held land in and around Las Vegas into private hands. I like that politically incorrect guy.

Then, I see some other fella on C-SPAN and “Meet the Press.” This other guy walks and talks like a lily-livered coward on terrorism, a crass political player on Social Security, a mute on abortion and family issues and Ted Kennedy on taxation. I don’t like that guy. And, I believe, most Nevadans are with me on that.

Nevadans who see Sen. Reid exercise his position as the Democratic leader of the Senate don’t see the hardscrabble conservative Mormon from Searchlight. They see a political transvestite who forsakes his home state to kowtow to the wildly liberal wing of the Democratic Party. When Harry meets Nancy on the national stage, they seem indistinguishable. Not because she’s him, but because him’s she. I know that’s not proper grammar, but it is a correct assessment from a Nevada perspective.

I’ve made similar observations about Reid here on numerous occaisons, minus the gender angle. Still, 2010 is a ridiculously long time away in political terms. 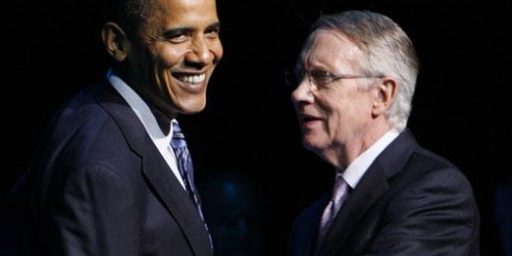