Apparently, the prospect of a thousand pound fine isn't enough to persuade Bristol's dog owners to clean up after their pooches. 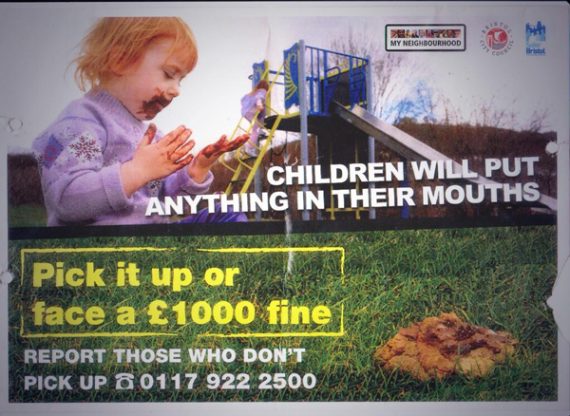 Apparently, the prospect of a thousand pound fine isn’t enough to persuade Bristol’s dog owners to clean up after their pooches.

Dogster (“Why Is This Little Girl Eating Dog Poop on This Billboard?“):

It’s a strange world when you have to do a double-take at a billboard to determine whether the cute little girl presented on it is smearing her face with dog poop.

Now, did looking at this make you think, “I will never leave my dog’s poop on the ground again because a little girl could eat it! Also: I know absolutely nothing about little girls and what they like to eat. Who knew?”

If you did think all that, good. That’s the hope and prayers of the the Bristol City Council, who are currently weathering the storm brewed up by their controversial decision to put a girl smearing her face with dog poop on a billboard. The group defended itself on Twitter, writing, “Shocking imagery, but perhaps it will help encourage a few more dog owners to do the responsible thing.”

Someone responded, “It seems to be working, I have seen 3 dog walkers eating dog poo this morning in the park.”

By the looks of little girl’s poop-smeared face, she appears to have gone through a solid handful of poop before the photographer got there, and is intent on licking the remaining poop from her hands. The poop is creamy, and is clearly fresh. It may even still be warm. I would not be surprised if the chef is in the distance, staring at the girl, hoping to get some feedback on the taste of what he just deposited on the playing field while his owner looked the other way and pretended not to notice what he was doing, the dirty, filthy, nasty scofflaw.

If only he had seen a billboard like this!

OK, I don’t know a million kids, but I do have quite a few nieces and nephews and every single one of them is at least somewhat discerning about the things they put in their mouths. Sure, they might try to eat an eraser or paste or other somewhat benign smelling things — but these kids turn their heads up at broccoli, so I highly doubt they’re cruising the dog park for a fix of fresh turd. That said, maybe I’m dead wrong? Perhaps kids today are trading their dumb fruit roll-ups and bologna sandwiches for highly coveted piles of crapola. What do I know.

My girls might well step in dog poop and track it around the house. But eat it? Not so much.