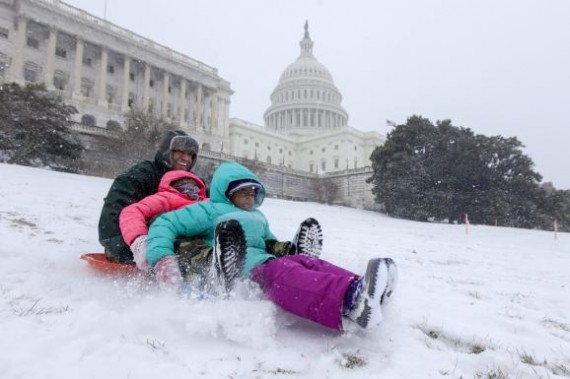 Yesterday, federal agencies in DC and Marine Corps Base Quantico were closed due to a major (for this area, anyway) snowstorm. Today, DC was on a two-hour delay and Quantico closed until noon because roads were icy from a second dusting and melting and refreezing.  Increasingly, though, this doesn’t mean the taxpayers are paying for nothing.

[S]now days often no longer equate to a vacation day. Increasingly, when an agency is closed, employees with telework agreements are expected to conduct their work from home. The popularity of telework has skyrocketed in recent years, thanks in large part to the 2010 Telework Enhancement Act.

About 30 percent of eligible employees teleworked at some point during fiscal 2012, according to OPM data, up from 21 percent the previous year. The number of all federal employees deemed eligible for telework by their agency increased by 49 percent between 2011 and 2012.

The option to keep government offices open, but allow unscheduled telework, is new since 2011. That status, according to one region’s federal executive board, has allowed some agencies to keep facilities open while mitigating transportation risks.

Telework has become “much more important in ensuring continuity of government,” said Lisa Makosewski, the head of Philadelphia’s FEB. The Philadelphia region closed for just the second time this winter on Thursday, despite receiving a record amount of snowfall. In previous winters, that total would have likely been higher, Makosewski said.

Alan Pentz of the Corner Alliance (a consulting firm to government clients) notes (“What a Snow Day Can Teach You About Your Organization“) that it could be better with improved management.

For federal agencies, the situation is more of a mixed bag. We’ve seen impressive new initiatives like those at the General Services Administration that enable employees to work almost anywhere and at any time. They are breaking down the traditional structures to create more flexibility and lower costs. They can also take on a snow day without missing a beat. GSA is showing that adjusting your organization to increase flexibility has a lot of benefits. It can speed decision-making, improve productivity and creativity, and help improve your culture.

Other agencies have more traditional arrangements, and a snow day results in a serious loss of productivity. This is a perfect time to think about how to move your organization toward increased flexibility and productivity. Here are three key questions:

Are we organized to maximize employee productivity and empowerment? Many organizations still hold on to complicated hierarchies that slow decision-making and make front-line employees feel like they don’t own their work. Think about how many reviews it took to get the last initiative you undertook signed off on? How many people reviewed the last deliverable you put out and how much value did each review add? If everything you do requires endless reviews and meetings about reviews, chances are you aren’t structured well and need to find a way to streamline decision-making. Employees who can’t move forward without multiple approvals and meetings aren’t going to be all that productive at home.

Do our people have the technology they need to stay productive? This question is pretty obvious. If people don’t have laptops, mobile devices, etc., they won’t be able to work away from the office. Are you using cumbersome and outdated VPNs and barriers to accessing files that could be streamlined without compromising security? Giving more flexibility to your employees has a lot of benefits in improving creativity and productivity. GSA didn’t move to a more mobile and flexible workforce just to stay productive on snow days.

Do we have the right culture? How productive people stay on a snow day can also tell you a lot about your organizational culture. Do people take any chance to goof off out from under the gaze of their boss? How great can their work be at the office if that’s the situation? You want people who are committed to your mission and are finding anyway they can to further it.

The nature of my work is that I can do most of it from home. That was true when I was in the private sector, with the Atlantic Council, and remains true now that I’m back in government service teaching at Marine Corps University. I can’t teach classes from home, of course (at least not in the traditional fashion) but I can do most anything else from here. The only real disadvantage of telecommuting, other than the inability to have quick face-to-face meetings with bosses and colleagues, is that I can’t easily access my .mil email account or files on the office intranet.

Thankfully, the culture of my institution makes that work. Accordingly, I frequently work from home even when it isn’t snowing and, even though the base and the university were both technically closed yesterday, I was nonetheless working.

It’s shocking to me how many agencies still haven’t embraced telework or made it possible for their workforce to carry out their responsibilities from home even on an emergency basis. To be sure, we don’t get so many snow days here that it’s a true crisis. But it just makes sense to facilitate productivity to deal with disruptions, whether caused by storms, child care emergencies, or other issues. 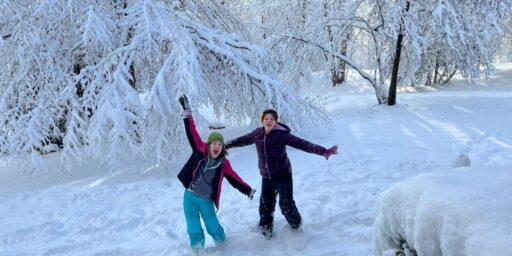