The number of uninsured Americans has declined since the Obamacare mandate went into effect. 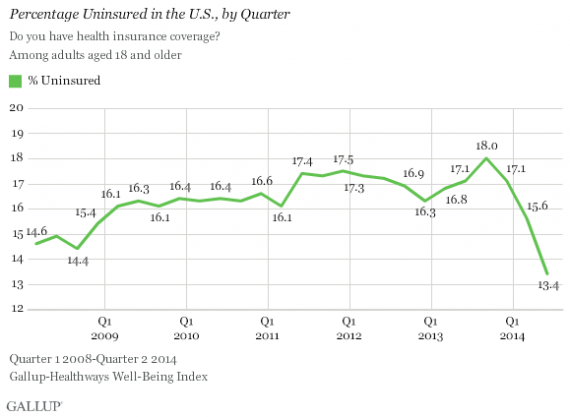 The number of uninsured Americans has declined since the Obamacare mandate went into effect according to three newly released surveys. The details are a bit vague.

According to Gallup (“In U.S., Uninsured Rate Sinks to 13.4% in Second Quarter“) “The uninsured rate in the U.S. fell 2.2 percentage points to 13.4% in the second quarter of 2014. This is the lowest quarterly average recorded since Gallup and Healthways began tracking the percentage of uninsured Americans in 2008. The previous low point was 14.4% in the third quarter of 2008.”

The decline in the uninsured rate last quarter took place at the start of the quarter. The drop reflected a surge of health plan enrollees in early April, prior to the April 15 extended enrollment deadline for people who had previously experienced technical difficulties with the federal healthcare exchange website. In April and May, the uninsured rate hovered at 13.4%, and it remained at that level in June — clearly indicating that the decline seen since late 2013 has leveled off.

While 18- to 64-year-olds are most likely to have health insurance through a current or former employer (43.5%), more reported having self-funded insurance coverage in the second quarter than did before the healthcare exchanges opened in October 2013. For Americans younger than 65, 20.7% say they have a health insurance plan they or a family member pays for, compared with 16.7% in August-September 2013.

Now, granted, 2008 is not only too recent to provide much historical perspective it also happens to be right as the global economic crisis was kicking into high gear. And the current “lowest ever” number actually isn’t radically below the starting number. Still, presumably, most of the 2.2 point change in the second quarter can be attributed to the new law. The only caveat, in terms of this survey, is that there’s the possibility of instrument effects:

We have a second survey from  the Commonwealth Fund showing a similar trend, however. McClatchyDC (“Survey: 9.5 million people gained health coverage in first marketplace enrollment period“):

Some 9.5 million Americans gained health coverage during the recent marketplace enrollment period as the uninsured rate for working-age adults fell from 20 percent to 15 percent, according to a new national survey by the Commonwealth Fund.

Young adults ages 19-34, whose participation in the Affordable Care Act’s coverage initiative was crucial but always uncertain, saw some of the largest coverage gains. Their uninsured rate fell from 28 percent to 18 percent.

Uninsured rates for Latinos fell from 36 percent to 23 percent, the survey found. And low-income adults earning less than 138 percent of the federal poverty level saw their uninsured rate drop from 35 percent to 24 percent.

The findings suggest the health law is meeting its goal of increasing coverage for hard-to-reach groups. Sixty-three percent of adults with new coverage through Medicaid or the insurance marketplaces were previously uninsured, the survey found.

“Adults who are being helped the most are those who historically have had the greatest difficulty affording health insurance and getting the care they need,” said Sara Collins, the lead survey researcher and Vice President for Health Care Coverage and Access at the Commonwealth Fund.

So, while the numbers are quite a bit different than the Gallup findings, the trends are robust and in the same direction. More importantly, we’re seeing what ObamaCare advocates would expect: significant increase in coverage for the targeted groups in expanded eligibility states and very little increase in others.

Finally, a new survey from the Urban Institute (“Number of Uninsured Adults Continues to Fall under the ACA: Down by 8.0 Million in June 2014“)

Again, the numbers themselves vary from the other polls but the movement is in the same direction and differentiated among the groups in the way we’d expect. Given the size of the differences and the fact that they’re consistent across three independent surveys would indicate it’s not a polling artifact.

Interestingly, while the Urban Institute is ostensibly the most biased—it’s a progressive advocacy group, not an independent polling firm—it gives the most context for its data:

There are, however, limitations to this analysis. The HRMS was designed to provide early feedback on ACA implementation to complement the more robust assessments that will be possible when federal surveys begin releasing their estimates later in 2014 (Long et al. 2014). Though HRMS estimates capture the changes in insurance coverage from the first open enrollment period under the ACA, the estimates understate the full effects of the Affordable Care Act because the estimates do not reflect the effects of some important ACA provisions (such as the ability to keep dependents on health plans until age 26 and early state Medicaid expansions) that were implemented before 2013. In addition, these change estimates might not reflect only the effects of the ACA, because they do not control for long-term trends in health insurance coverage that predate the ACA or control for changes in the business cycle. Further, the difference in coverage gains between the states that did and did not expand Medicaid should not be entirely attributed to the ACA; there were other policy choices that likely affected enrollment. For example, many of the nonexpansion states did not set up their own Marketplaces and therefore did not get the same access to outreach and enrollment assistance funding.

All of that’s worth keeping in mind. The bottom line, though, is that Obamacare seems to be having the desired effect—both decreasing the percentage of Americans without healthcare coverage and increasing those with it.

What’s not clear from these surveys is how much of the change reflects young adults that are now covered on their parents’ plans because of the raised age limit, how much reflects those on the public dole via Medicaid expansion, and how much is a function of people previously ineligible for affordable group rates now covered under the exchanges. From an affordability and sustainability standpoint, that’s worth knowing.