Finally, "law and order" Joe Arpaio gets what he has long deserved. 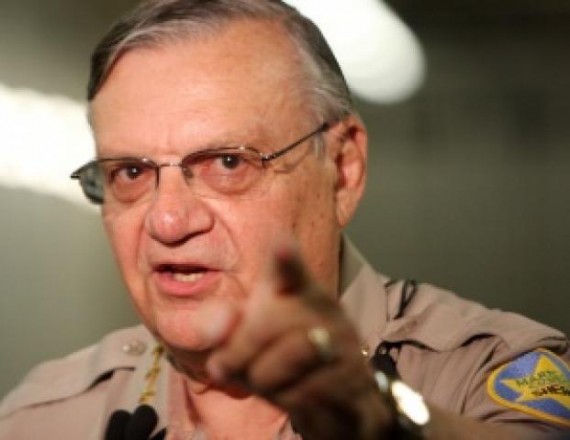 Former Maricopa County Sheriff Joe Arpaio, who was denied re-election last November, was convicted yesterday in his trial for contempt of court due to his refusal to comply with a Federal Court order regarding his department’s treatment of immigrants:

Former Sheriff Joe Arpaio committed a crime by defying a court order to stop detaining suspected undocumented immigrants, a judge ruled on Monday, in the latest rebuke for a once-popular politician who was voted out of office last year.

The conviction comes as sheriffs are under pressure to play a major role in the Trump administration’s immigration crackdown. The president has threatened to withhold federal funds from local governments that do not cooperate by holding jail inmates for deportation, and immigrant advocates have pushed back with lawsuits charging that such detentions violate constitutional rights.

Mr. Arpaio served for 24 years as sheriff of Maricopa County, Ariz., which includes Phoenix, building a national reputation for harsh conditions in his county jail, and for his campaign against undocumented immigrants. The criminal charge grew out of a lawsuit filed a decade ago charging that the sheriff’s office regularly violated the rights of Latinos, stopping people based on racial profiling, detaining them based solely on the suspicion that they were in the country illegally, and turning them over to the immigration authorities.

Hearing the suit, another federal district judge, G. Murray Snow, ordered the sheriff in 2011 to halt detention based solely on suspicion of a person’s immigration status, when there was no evidence that a state law had been broken. An appeals court upheld that ruling, and Judge Snow later reinforced it with other orders.

But Mr. Arpaio insisted, publicly and repeatedly, that his office’s practices were legal and would not change, and advocates said the detentions continued.

On Monday, Judge Bolton ruled that Mr. Arpaio had willfully violated the 2011 court order. “Not only did Defendant abdicate responsibility, he announced to the world and to his subordinates that he was going to continue business as usual no matter who said otherwise,” she wrote.

Cecillia Wang, deputy legal director of the American Civil Liberties Union and one of the lawyers in the suit against Mr. Arpaio , said the verdict “is a vindication for all the victims of his illegal stops and detentions whose constitutional rights were violated.”

Some supporters of stricter immigration enforcement rallied behind Mr. Arpaio. Dan Stein, the president of the Federation for American Immigration Reform, said the election of President Trump had vindicated Mr. Arpaio’s policies.

“Clearly Joe Arpaio won the war, even though he lost this particular battle,” Mr. Stein said. “Like any good American citizen, he recognized his obligation and was willing to pay the price for a form of civil disobedience.”

Jack Wilenchik, one of Mr. Arpaio’s lawyers, said Judge Snow’s 2011 order “was not clear and definite, and Judge Bolton did not adequately address that.” He added that Judge Bolton had also violated Mr. Arpaio’s rights by denying him a trial by jury.

The former sheriff lost the civil case in 2013, when Judge Snow ruled that his office had systematically violated the rights of Latinos, echoing the findings of a Justice Department report from 2011.

In 2015, Judge Snow found Mr. Arpaio in civil contempt of court for violating the initial order, and prosecutors charged him with criminal contempt. Mr. Arpaio maintained in both cases that he had not willfully defied the court, and that any violations were committed by his underlings.

Judge Bolton dismissed that claim, citing evidence that Mr. Arpaio understood the order, and noted the several times when he had said he would not change his ways.

She scheduled sentencing for Oct. 5.

As I noted back in November when he was defeated in his bid for a seventh term as Sheriff, Arpaio has been a source of both fame and controversy since the beginning of his time as Sheriff of Maricopa County. In the beginning, Arpaio achieved fame due to his supposed status as a “law and order” law enforcement officer who cracked down on crime, a narrative that played well in the 90s when crime rates were much higher than they are today and even Democrats such as President Clinton were advocating harsher penalties and, at least implicitly, harsher treatment for criminals and people accused of crimes. In that environment, Arpaio’s policies toward running the jails under his jurisdiction, which included things such as putting inmates in tent encampments where they didn’t have access to the alleged “luxuries” of many modern prisons such as television and a wider selection of food and forcing male prisoners to wear pink in what was clearly meant to be an effort to humiliate them received coverage from national news media that was often obsequiously positive. During this time, Arpaio developed a national reputation as a “law and order” Sheriff who strictly enforced everything from drunk driving laws to petty offenses that other departments might refrain from targeting in favor of concentrating on more serious offenses.  Consequently, Arpaio became something of a nationwide hero with supporters across the country and largely positive coverage from the media.

Slowly but surely, though, Arpaio’s reputation became far more controversial and far more partisan.  To a large extent, this was due to the extent to which Arpaio and his department, and eventually the entire state of Arizona, found itself at the center of the debate about illegal immigration. When the immigration debate became a front burner issue on the national level, Arpaio’s treatment of immigrants and people of Latino descent came under increased scrutiny, as did the practices at the jails he ran, and that’s when his reputation began to fall apart.  Arpaio’s department came under scrutiny both from the media and the Justice Department and Federal Judiciary, and he found himself spending a lot more time in court for violating various Orders and Consent Decreest that resulted from allegations regarding conditions at his jails and his treatment of Latino suspects, defendants, and convicts under his jurisdiction. He became a further source of controversy when he joined in with the birthers who contended that President Obama was not born in the United States and not eligible to be President. This included spending county resources “investigating” the birth certificate that the White House released in April 2011 in response to Donald Trump’s month’s long crusade, which he contended was fraudulent. Arpaio was also an early and vocal supporter of Trump’s 2016 campaign for President. At that point, though, Arpaio had gone so far off the deep end that even most conservatives wanted nothing to do with him and the forces in Arizona that opposed him were more emboldened than ever before, convinced they could unseat him. By Election Day 2016, the question seemed to be not if Arpaio would be removed from office but whether that removal would come at the hands of the voters or by the Federal Courts finally putting a stop to his violations of civil liberties,

As it turned out, the voters got rid of him before the Courts could. Now, though, Arpaio will have to face some justice for his numerous violations of civil liberties over a two-decade period. If there’s any justice in this world, he would be sentenced to serve his time under the same ridiculous conditions that he set for prisoners when he ran the county jails in Maricopa County, Arizona.