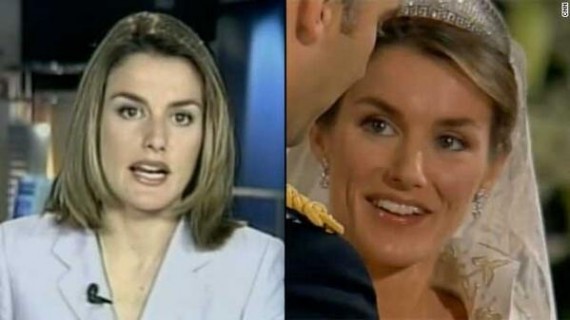 Seeing the tweet “Former CNN reporter to become Queen of Spain” from CNN, I was intrigued.

Naturally, I wondered which CNN reporter. It turns out that Letizia, Princess of Asturias, who becomes queen tomorrow, is the former Letizia Ortiz Rocasolano.

Never heard of her? Me either. She didn’t actually report for CNN proper but rather something called CNN+. Wikipedia:

In 2000, she moved to TVE, where she started working for the news channel 24 Horas. In 2002, she anchored the weekly news report program Informe Semanal and later the daily morning news program Telediario Matinal on TVE 1.[12][13] In August 2003, a few months before her engagement to Felipe, Letizia was promoted to anchor of the TVE daily evening news program Telediario 2, the most viewed newscast in Spain.

In 2000 Letizia reported from Washington, D.C. on the presidential elections. In September 2001 she broadcast live from Ground Zero following the 9/11 attacks in New York and in 2003 she filed reports from Iraq following the war. In 2002 she sent several reports from Galicia in northern Spain following the ecological disaster when the oil tanker Prestige sank.