As widely rumored, Fredi Gonzalez has been hired to manage the Atlanta Braves, following the retirement of the beloved Bobby Cox. 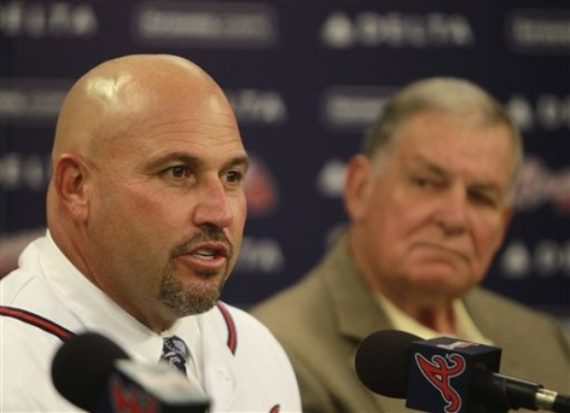 As widely rumored, Fredi Gonzalez has been hired to manage the Atlanta Braves, following the retirement of the beloved Bobby Cox.

Cox held a farewell news conference at Turner Field, reminiscing about a career that left him as the fourth winningest manager in baseball history and a likely Hall of Famer. As soon as he was done, the Braves introduced Gonzalez as their new manager, with Cox as his side.

“This is perfect for us on so many levels,” general manager Frank Wren said.

Gonzalez served as the Braves’ third-base coach from 2003-06. He then took over as Florida’s manager, a post he held for 3½ years. He had a record of 276-279 with the Marlins, one of baseball’s lowest-spending teams.

When Cox decided 2010 would be his final year, the Braves immediately thought of Gonzalez as their No. 1 candidate — even though he was managing another team.  “He was on our radar before he was available,” Wren said. “We thought there may come a time when we were going to have to ask the Florida Marlins for permission to talk to their manager. We really thought Fredi was the best candidate for us.”

That became a moot point when Gonzalez was fired by the Marlins on June 23, a month after he benched star shortstop Hanley Ramirez for a lack of hustle — a move that many believed angered owner Jeffrey Loria.

Gonzalez said he never thought his decision would become such a big deal, perhaps costing him his job but drawing praise from around baseball.  “That’s the way I was brought up,” he said. “I know the way the game should be played. If you don’t something, you’re going to lose those 24 other guys. For me, it was just a simple thing to do.”

In early July, Wren took the unemployed Gonzalez to his lake cabin in east Alabama for a daylong interview. A few days later, team president John Schuerholz met with Gonzalez. Finally, in September, the top two Braves officials held one more formal interview with Gonzalez and knew they had the right guy.  The Braves didn’t even bother interviewing anyone else, and Gonzalez turned down the chance to talk with four other teams that need or were considering new managers, most notably the Chicago Cubs. “He’s got a great personality,” Wren said. “Players gravitate toward him. They like playing for him. It’s important that guys like playing for you, because they’ll usually play even better. We’ve seen him over the course of time. Managing at the major league level is different, but we saw what he did at Florida. He ran a good game.”

Gonzalez said he’s not worried about following in Cox’s large footsteps. The Braves’ manager since 1990, he led the team to an unprecedented 14 straight division titles and the 1995 World Series championship. After missing the playoffs the last four years, Atlanta returned as a wild card this season.

Cox’s last hurrah ended with a four-game loss to the Giants in which every contest was decided by one run.

“Our goal is simple: We want to keep putting flags on that facade up there,” Gonzalez said. “I don’t think there’s a person alive that’s going to replace Bobby Cox. We just want to continue the winning tradition and go from there.”

Cox chimed in, saying it’s not going to be that tough for Gonzalez to put him own stamp on the job.  “Walter Alston was replaced by Tommy Lasorda,” Cox said. “Tommy did a great job and they forgot all about Walter Alston. That is what’s going to happen here.”

He recalled the advice he gave Gonzalez when he first took the Florida managing job in 2007.  “You are who you are. You’ve got to be yourself,” Cox repeated. “Fredi’s got the right makeup to be a great manager. He has all the respect around baseball that you can get. I just want to be in the background. There’s always going to be new starts, and Fredi is getting a new start here.”

Gonzalez said he’ll do a few things differently than Cox. Perhaps the most noticeable change will be having the players stretch on the field before batting practice, something his predecessor never asked the Braves to do.

Also, the Braves shook up Cox’s coaching staff just a bit, firing first-base coach Glenn Hubbard and bench coach Chino Cadahia. Carlos Tosca, who was with Gonzalez in Florida, will take over the bench coach duties and hitting coach Terry Pendleton will shift over to Hubbard’s post.  The Braves plan to hire a new hitting coach after struggling at the plate this season.

“There’s not going to be a lot of crazy changes,” Gonzalez said. “The players might not even notice it. But whoever comes in has their own little way of doing things.”

As adamant as I’ve been that my Dallas Cowboys should never have hired Wade Phillips, this struck me as the obvious move as soon as I heard Gonzalez’ name mentioned.  He’s got a working relationship with the organization and a personality as close to Cox’ as you’re likely to find.  Indeed, the Ramirez benching reminds of me Cox stopping a game to pull a young Andruw Jones out of a game for failing to hustle in the outfield.   That worked out pretty well.

I haven’t followed the Braves as closely as I used to in recent years, partly because baseball’s new rules don’t allow TBS to show every game, ruining the continuity of the season for those of us not in the viewing area, and mostly because family obligations make it tough to justify spending the time.  But, while the team has fallen off a bit from the glory days of 15 straight division titles, there’s still a Braves Way of doing things.   And it looks like they’ve decided to continue it.

AJC’s Mark Bradley disagrees, figuring the Braves should have at least interviewed some assistants from clubs that have been hot lately.  And maybe get more into SABREmetrics.  But that only makes sense if you’re making a change at GM.  The manager has to manage people first.   He’s right that the Braves haven’t made it to a World Series in a long time.   But that’s a function of having fallen to the middle of the pack in spending for a number of years.  And, frankly, getting a little long in the tooth.   The team has a lot of young talent again and appears to be back in contention.