Kickstarting a dream of potato salad to the tune of $40k+ 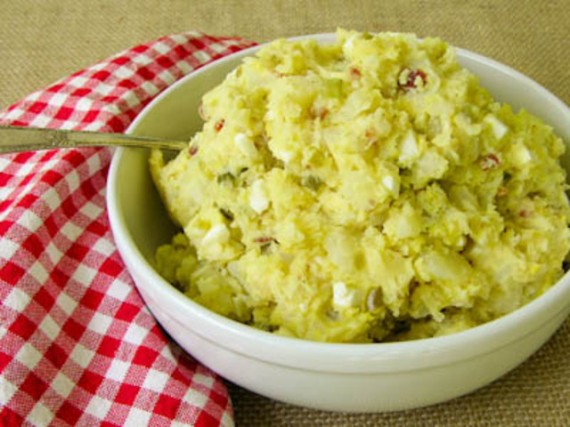 Part of the story of the internet are all the various crazy ideas and sites that seemingly came from no where. A few years ago it was the guy who managed to trade up from a single red paperclip to a house. Today, it’s a Kickstarter that, as of this writing, has gotten almost $40,000 in funding to make… well, I’ll let the creator speak for himself:

Of course, getting 4000% over your initial goal of $10 means that some stretch goals needed to be added. Wisely, Zach “Danger” Brown of Columbus OH, the creator of said Kickstarter kept his goals and rewards pretty humble.* His stretch goals include:

$3000: My kitchen is too small! I will rent out a party hall and invite the whole internet to the potato salad party (only $10 and above will be allowed in the kitchen)! The internet loves potato salad! Let’s show them that potato salad loves the internet!!

On July 3rd, CNet posted a brief story on the Potato Salad Kickstarter and a tipping point was reached. When I first learned about the story last night, the donations were “only” at $24K. No word on when all the copy cats kick starters will begin.

Anyone want to fund my bowl of Coleslaw?

* – One of things that isn’t talked about with Kickstarter is how ill-planned stretch-goals can sometimes bankrupt projects.

For example, take the case of cartoonist John Campbell, the creator of Pictures For Sad Children. Campbell collected and published the first 200 strips in a print volume in 2009. In 2012 he set up a Kickstarter to raise the money to publish a second printed volume. He asked for $8000. He got $51,615.

Apparently Campbell had not planned to be anywhere near this successful – especially not at the higher levels of funding. He had promised to mail printed copies of the book to everyone who donated $25 or more. The problem Campbell apparently encountered was over 1000 people funded at that level. The resulting postage and time costs, on top of the existing print costs, apparently consumed more than Campbell has expected.

And when people started to complain that they had failed to receive their books, Campbell came up with a novel solution: he burned the books and posted pictures of the burning online, complete with a “this is all your fault” rant. An account of the full, strange story — including excerpts from Campbell’s rant — can be found at Bleeding Cool.