From the “Misunderstanding the Way the World Works” File

The Parents Television Council (PTC) issued a complaint against the channel over the 20-year-old’s routine, which saw her dance suggestively in a nude bikini with singer Robin Thicke.

It argued the show should not have been rated as suitable for 14 year olds, adding: "Heads should roll at MTV."

Given that this is more attention that MTV, the VMA, or, for that matter, Miley Cyrus has received in some time, I expect that heads will most certainly not be rolling at MTV.

Cyrus appears to be unaffected by the criticism, tweeting: "My VMA performance had 306,000 tweets per minute. That’s more than the blackout or Superbowl!"

Music industry sources say the former Disney star can expect a sales boost of between 10 and 20% as a result.

The best description I have seen of this was by a colleague of mine, Scott Nokes, on FB:

If I am to understand the images I’ve seen on the interwebs, Beetlejuice and a teddy bear opened a rather gross and untalented strip club.

I finally watch the video, which is truly one of the stranger things I have seen in a while. I am not sure what to say about the teddy bear imagery (or, really, any of it).

However, am I shocked to find such things at an MTV awards show?  I think not.

Amusing side note to the complaint from the PTC:  “Miley’s father Billy Ray Cyrus is among those on the PTC’s advisory board.” 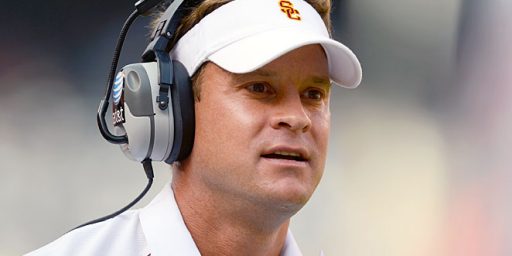 Lane Kiffin Fired – Who Will Hire Him Next?