Prices for all grades of gasoline rose 1.34 cents in the last two weeks to a record high nationwide average of $1.77 a gallon, according to a study released Sunday.

Gas prices have jumped by nearly 26 cents so far this year, and while they won’t be falling by that amount any time soon, they aren’t expected to rise much higher, according to the Lundberg survey of 8,000 stations nationwide. The survey was conducted Friday.

Of course, these sort of comparisons are silly since they don’t adjust for inflation. In real dollars, the current rates* are quite normal: *Note: The chart prices are for unleaded regular, whereas the $1.77 figure is the average of prices paid for all grades. But the chart is for California, which tends to have higher prices. 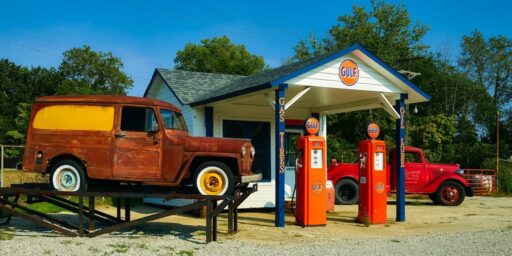