Congressman Louie Gohmert thinks he has a great argument against educating kids about sex and reproduction:

Rep. Louie Gohmert says he doesn’t see the value of sex education, noting that “mankind has existed” just fine without for a long time.

On Monday, the Texas Republican was discussing indoctrination through education on a conservative radio show “Wallbuilders Live,” and decrying what he said was a liberal agenda to push homosexuality and sexuality on children too young.

“Actually, mankind has existed for a pretty long time without anyone ever having to give a sex ed lesson to anybody. And now we feel like, oh gosh people are too stupid unless we force them to sit and listen to instructions. It is just incredible,” Gohmert said. “For heaven’s sake, let the kids be innocent.”

Does Gohmert also believe that human beings don’t need to learn English since we’ve been talking for a long time? 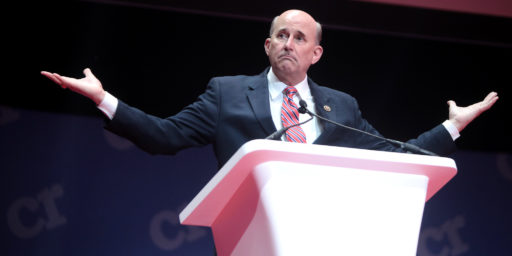 Attack Of The Terror Babies