Juergen Habermas is posting on weblogs now. On blogspot, no less. The gist of a very long post:

During the bleak months before outbreak of the Iraq war a morally obscene division of labour had been stirring up emotions. The logistically immense operation of the inexorable military build-up and the hectic activity of the humanitarian relief organizations interlocked with the precision of gear wheels. The spectacle also played itself out undisturbed before the eyes of the population, which – with each member robbed of his own inititiave -would be its victim. There is no doubt that the power of feelings brought Europe’s citizens to make a stand together. But the war also brought Europeans awareness of the long foreseen failure of their common foreign policy.

As in the rest of the world the casual breech of international law kindled a controversy over the future of the international order in Europe too. But the divisive arguments affected us more deeply. The familiar fault lines were only profiled more sharply over this controversy. Controversal statements about the role of the superpower, about the future world order, the relevance of international law and the UN caused latent conflicts to break out openly. The gap between continental and Anglo-Saxon countries on the one hand, “old Europe” and the Central and Eastern European candidates for entry on the other, deepened. In Great Britain the special relationship with the United States is by no means undisputed, but it still remains right at the top of Downing Street’s order of preferences. And the Central and Eastern European countries strive to join the European Union, without being ready yet to limit their only recently won sovereignty again. The Iraq crisis was only the catalyst. In Brussels too the consitutional convention shows up the contrast between nations which really want a deepening of the European Union, and those which have an understandable interest in freezing or at best cosmetically changing the existing mode of intergovernmental rule. The difference can now no longer be exaggerated.

I’m amused at the degree Rumsfeld’s “Old Europe” meme has taken hold. Still, while I agree that the Iraq conflict demonstrated the rift between “OE” and the US, the rather histrionic reaction that follows is quite unwarranted:

In this world the sharpening division of politics into the alternative, as stupid as it is costly, between war and peace does not pay. Europe must throw its weight into the balance on an international level and within the framework of the UN, in order to counterbalance the hegemonic unilateralism of the United States. At world economic summits and within the institutions of the World Trade Organization, the World Bank and the International Monetary Fund it must bring its influence to bear on the design of a future world domestic policy.

So, basically, the rest of Europe should become more French. Yeeha.

Further, the conclusion is directly contrary to the facts that underline the premise. Basically, the argument here is that Europe is fragmented and going off in all manner of different directions because of the divergent national interests of its constitutent members and the solution is to all work together for their common vision and oppose the US. Hmm. Isn’t the problem the lack of common vision rather than the US?

Junius has an excellent take on the Habermas post. 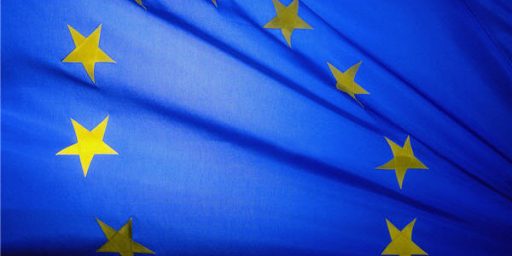 There Are No “Europeans”