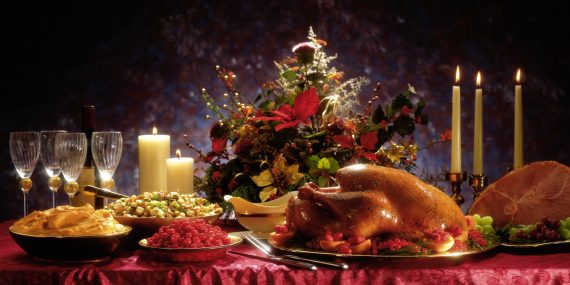 And here’s President Obama’s Proclamation for 2015:

Rooted in a story of generosity and partnership, Thanksgiving offers an opportunity for us to express our gratitude for the gifts we have and to show our appreciation for all we hold dear. Today, as we give of ourselves in service to others and spend cherished time with family and friends, we give thanks for the many blessings bestowed upon us. We also honor the men and women in uniform who fight to safeguard our country and our freedoms so we can share occasions like this with loved ones, and we thank our selfless military families who stand beside and support them each and every day.

Our modern celebration of Thanksgiving can be traced back to the early 17th century. Upon arriving in Plymouth, at the culmination of months of testing travel that resulted in death and disease, the Pilgrims continued to face great challenges. An indigenous people, the Wampanoag, helped them adjust to their new home, teaching them critical survival techniques and important crop cultivation methods. After securing a bountiful harvest, the settlers and Wampanoag joined in fellowship for a shared dinner to celebrate powerful traditions that are still observed at Thanksgiving today: lifting one another up, enjoying time with those around us, and appreciating all that we have.

Carrying us through trial and triumph, this sense of decency and compassion has defined our Nation. President George Washington proclaimed the first Thanksgiving in our country’s nascence, calling on the citizens of our fledgling democracy to place their faith in “the providence of Almighty God,” and to be thankful for what is bequeathed to us. In the midst of bitter division at a critical juncture for America, President Abraham Lincoln acknowledged the plight of the most vulnerable, declaring a “day of thanksgiving,” on which all citizens would “commend to [God’s] tender care” those most affected by the violence of the time — widows, orphans, mourners, and sufferers of the Civil War. A tradition of giving continues to inspire this holiday, and at shelters and food centers, on battlefields and city streets, and through generous donations and silent prayers, the inherent selflessness and common goodness of the American people endures.

In the same spirit of togetherness and thanksgiving that inspired the Pilgrims and the Wampanoag, we pay tribute to people of every background and belief who contribute in their own unique ways to our country’s story. Each of us brings our own traditions, cultures, and recipes to this quintessential American holiday — whether around dinner tables, in soup kitchens, or at home cheering on our favorite sports teams — but we are all united in appreciation of the bounty of our Nation. Let us express our gratitude by welcoming others to our celebrations and recognize those who volunteer today to ensure a dinner is possible for those who might have gone without. Together, we can secure our founding ideals as the birthright of all future generations of Americans.

NOW, THEREFORE, I, BARACK OBAMA, President of the United States of America, by virtue of the authority vested in me by the Constitution and the laws of the United States, do hereby proclaim November 26, 2015, as a National Day of Thanksgiving. I encourage the people of the United States to join together — whether in our homes, places of worship, community centers, or any place of fellowship for friends and neighbors — and give thanks for all we have received in the past year, express appreciation to those whose lives enrich our own, and share our bounty with others.

IN WITNESS WHEREOF, I have hereunto set my hand this twentieth day of November, in the year of our Lord two thousand fifteen, and of the Independence of the United States of America the two hundred and fortieth.

As in the past, no real posts today absent major earth-shattering news, and probably not even then. However, in keeping with the political spirit of what we do here, I must once again share these classic clips from The West Wing