Hugh Hewitt has once again mentioned OTB, this time in a Weekly Standard piece expanding his argument that there is an anti-Catholic litmus test for the federal bench.

He summarizes the contrarian arguments quite well: Critics of the charge of anti-Catholic bias come in two categories:

Those who argue that the criticism is too small and those who argue it is too large. Fred Barnes, for example, has argued that the bias of the Democrats is against people of all religious backgrounds who oppose abortion, and thus to confine the argument to anti-Catholicism is to overlook the broader fight. Defenders of the new test simply assert that it is a simple, completely nonreligious, and appropriate test that excludes all anti-abortion nominees, regardless of their faith, from the bench.

This is correct although, to me, they’re the same argument: It’s an pro-abortion rights litmus test, pure and simple. Yes, devoutly religious people, including Roman Catholics, are more likely to believe abortion is wrong. But secularists like myself also believe this. Indeed, we’d be just as likely to get filibustered if nominated as a Catholic. (Although, as an aside, a professed non-believer would be far less likely to get nominated. Now that’s a religious test.)

Professor Jonathan Adler of Case Western Reserve Law School walks a middle ground. “Is this Catholic bigotry?” he asked. “Not by traditional definitions. There is no anti-Catholic animus as such. There is, however, a clear disparate impact on Catholics (among others) and this impact is foreseeable. The policy is anti-Catholic in effect, if not in intent. Under the definition of discrimination advanced by the left–and championed by Senator Kennedy and other Democrats in the debate over the 1991 Civil Rights Act–this is actionable discrimination.”

Tempting as Adler’s position is, it misses the genuine problem with the Democrats’ position: Their test falls inevitably on Catholics who are faithful to the Catechism, and that faithfulness can be inferred from other behaviors without a question ever being asked and answered. Truly, can it possibly escape the notice of Leahy’s crowd that a nominee is a daily communicant? Does it really seem possible that the minority staff on the Judiciary Committee draws no conclusions from the religious practices revealed in FBI background reports? If a nominee to the appellate bench declares himself a faithful Catholic, trying to conform his or her life to the teachings of the Roman Catholic Church, isn’t a filibuster inevitable?

Well, yes. But, again, this is still about abortion. All this says is that, if you’re a devout Catholic, the presumption is that you’re against abortion. So, Catholicism is an indicator of a “problem” not the “problem” itself.

For those who haven’t read anything else I’ve posted on abortion (I have a whole category archive devoted to the topic), I oppose it. I think Roe v. Wade was an abominable decision and would like to see it overturned, with each of the several States deciding on the circumstances under which abortion should be legal. But people who have a different view on this aren’t necessarily “bigots” who hate Catholics. 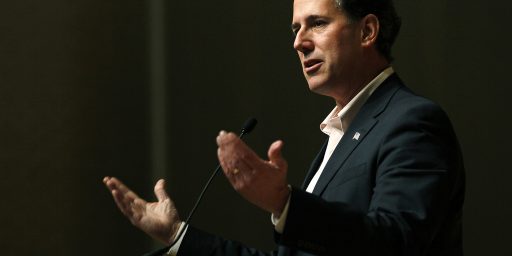