“Hey Mom, We Got To Dance Right Next To A Dead Guy” 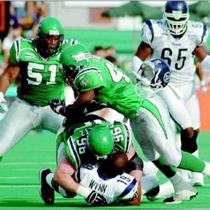 Then they sent in 200 little girls to finish him off… (video courtesy Dodosville.)