I’ve been arguing for quite some time both here and on OTB Radio that Hillary Clinton’s protectionist rhetoric on trade has been 180 degrees from the policy that her husband carried out as president. Now, we have the perfect illustration.

It’s a story Hillary Clinton loves to tell, about how the Chinese government bought a good American company in Indiana, laid off all its workers and moved its critical defense technology work to China. And it’s a story with a dramatic, political ending. Republican President George W. Bush could have stopped it, but didn’t. If she were president, she says, she’d fight to protect those jobs. It’s just the kind of talk that’s helping her win support form working-class Democrats worried about jobs and paychecks, not to mention their country’s security.

What Clinton never tells in the oft-repeated tale is the role prominent Democrats played in selling the company and its technology to the Chinese. She never mentions that big-time Democratic contributor George Soros helped put together the deal to sell the company, or that the sale was approved by the administration of her husband.

In 1995, General Motors decided to sell the Indiana-based Magnequench to a Chinese-American consortium. The consortium included:

Soros, of course, is the wealthy investor who has contributed vast sums to Democratic candidates and liberal causes. He’s given more than $250,000 to Democratic campaign committees, tens of thousands to individual Democratic candidates, and about $2.5 million to the liberal group, Moveon.org, according to Federal Election Commission records. He’s also contributed to Hillary Clinton’s Senate campaign, and to Obama’s Senate and presidential campaigns. He contributed to Republican Sen. John McCain’s first presidential campaign, in 1999, when he was running against Bush for the Republican nomination.

Because Magnequench made magnets for smart bombs, the sale to a group including foreign owners required approval under a 1988 law. After a 30-day review, the Clinton administration’s Committee on Foreign Investment in the United States, which includes representatives of the Pentagon, approved the sale in 1995.

In fairness to Hillary, the first Indiana plant wasn’t closed until 2001 and the Bush Administration declined to intervene to stop it. But all the steps along the way took place under Bill’s watch. And, frankly, given his friendliness to China and his ideological commitment to free trade, it’s incredibly unlikely that he would have acted any different than his successor.

Hillary is under no obligation to follow her husband’s policies, of course. But it’s more than a little disingenuous to criticize Bush for carrying out policies that her husband started and claiming that it’s a partisan issue. 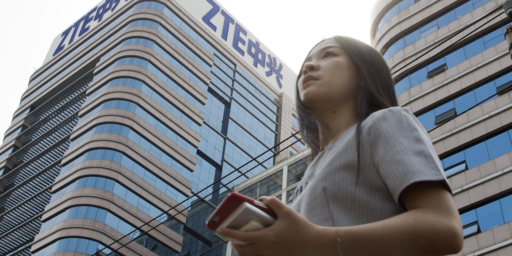