As I noted last night in connection with the case of Edward Snowden, the United States does not have an Extradition Treaty with the People’s Republic of China, but does have one with Hong Kong that was entered into about two years prior to the city’s 1999 turnover to Chinese control by the British. As it turns out, though, that treaty effectively gives China veto power over any extradition request:

Hong Kong could refuse to extradite US whistleblower Edward Snowden if Beijng wanted to keep him, according to a treaty signed between the United States and Hong Kong almost two decades ago.

Hong Kong has the “right of refusal when surrender implicates the ‘defense, foreign affairs or essential public interest or policy'” of the People’s Republic of China, according to the US-Hong Kong Extradition Treaty signed in 1997.

Snowden chose to seek refuge in Hong Kong because of the city’s “strong tradition of free speech”, he said in an interview with theGuardian published earlier today. He also said that he was concerned about being handed to mainland Chinese or US authorities.

The US justice department has initiated an investigation into his leaking of a secret US data gathering programme, that has collected records of trillions of online messages and phone calls over several years. US members of congress have already called for his extradition to the US to stand trial.

China does not have an extradition treaty with the United States.

According to notes on the treaty submitted to the US Senate, the Hong Kong negotiators had insisted on including clauses making it easily possible to deny extradition to the US, arguing that such a clause was essential in obtaining mainland Chinese approval for the treaty.

As such, article 3 of the treaty allows the Chinese government to refuse surrendering a person if it thought the surrender “relates to (its) defense, foreign affairs or essential public interest or policy”.

Hong Kong can also refuse if the city or the mainland have begun proceedings for the prosecution of that person. Hong Kong can reject an application if the city felt that the request was “politically motivated” or that Snowden would be prosecuted for his political opinions

Many people have commented since last night on this matter and expressed some skepticism about Snowden’s reasoning for choosing Hong Kong as his place of apparently refuge for at least the foreseeable future. Based on these provisions of the applicable treaty, it would appear that he may have made a fairly wise choice as far as his own personal safety is concerned. Of course, the other side of the coin is that the Chinese themselves may be interested in talking to Snowden, and in that situation there’s not going be much the US can do to protect him. 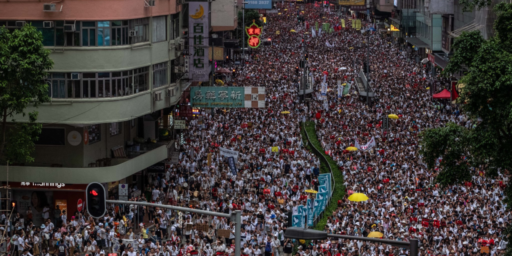