NYT has a piece entitled, Congress Looks to Grant Legal Status to Immigrants.

Eighteen-year-old Yuliana Huicochea moved to the United States at age 4, but now faces deportation because immigration officials stopped her on a school trip to a science fair.

Hispanic groups and immigrant advocates have embraced her cause, insisting that it is wrong to expel teenagers who immigrated as toddlers. And now, with many members of Congress thinking about next year’s elections and paying increasing attention to the concerns of Hispanics, the issue is gaining bipartisan interest on Capitol Hill.

Orrin G. Hatch, the Utah Republican who is chairman of the Senate Judiciary Committee, is sponsoring a bill that would grant legal status to Ms. Huicochea and tens of thousands of other high school students or graduates who are illegal immigrants. His bill — the Development, Relief and Education for Alien Minors (or Dream) Act, has 36 sponsors, one-third of them Republican. His aides say they expect the Judiciary Committee to approve the bill this week.

The bill is part of a wave of immigration legislation that has gathered bipartisan momentum in recent weeks. One bill would grant accelerated citizenship to immigrants who serve in the armed forces. Another would grant legal status to 500,000 farm workers if they commit themselves to doing agricultural work for several more years. That bill’s main sponsors in the Senate are Larry Craig, Republican of Idaho, and Edward M. Kennedy, Democrat of Massachusetts. They say it has the support of the Senate leadership, conservatives, liberals, agricultural employers, the nation’s largest farm workers’ union, the Chamber of Commerce and the A.F.L.-C.I.O.

Every few years, we have this debate and wind up putting a Band Aid on the problem: creating a window where illegals who have arrived recently can get legalized status. We now give medical benefits and provide education for children of illegal immigrants. We’re debating giving them drivers’ licenses. Yet, inexplicably, they continue to be “illegal.”

It seems to me that we should either get serious about enforcing the law or change it. Having laws on the books that are routinely ignored is bad for society, because it undermines respect for the law (which is one reasn why I support drug legalization, especially for marijuana, and a rethinking of our speed limits). Clearly, a law which forbids desperately poor people from crossing a 3000 mile border dividing them from a comparative paradise where employers eagerly desire their services is unenforceable without resorting to tactics only Saddam Hussein could love. Further, there are sectors of our economy that could scarcely survive having the laws on the books becoming actuality. So, why not bring the law into accord with reality? 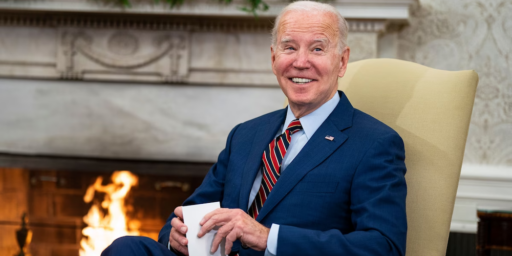 Did Biden Pull a Fast One on Immigration?