America's mission in Iraq is shifting from an active combat role to a smaller security presence. But the war that gripped our attention for years is now off the radar screen. 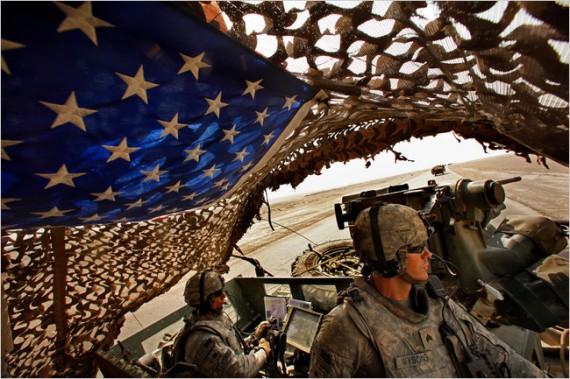 Peter Baker of the NYT has a superb analysis of the war headlined “As Mission Shifts in Iraq, Risks Linger for Obama.” But, while the opening paragraphs talk about the banal politics, the meat of the essay is about where we are now.

The official transition from Operation Iraqi Freedom to Operation New Dawn is as much a change in labels as it is a change in mission. With violence far below its peak in 2006 and 2007, American forces have increasingly taken a back seat to the Iraqi security units they trained.

But after seven years of a war started by President George W. Bush on the basis of false intelligence, the desire for finality, and perhaps closure, has focused attention on this moment and provoked a fresh discussion in Washington about what it all has meant.

After hundreds of billions of dollars, more than 4,400 American military deaths and at least 100,000 Iraqi civilian deaths and perhaps many more, was it worth it? Did toppling a dictator and nursing a fledgling if flawed democracy make a difference? And did the United States salvage credibility by sticking it out and finally stabilizing Iraq even if not winning the clear-cut victory originally envisioned?

“If we can’t have a victory parade, we at least ought to be able to make some definitive conclusions,” said Andrew J. Bacevich, a military specialist at Boston University who lost a son in Iraq and has written a new book, “Washington Rules: America’s Path to Permanent War.” “And it just doesn’t seem that we are going to do so. We want to just move on, sadly.”

In part, that owes to the deteriorating situation in Afghanistan, where Mr. Obama is sending more troops, as well as the fragile economy at home, where millions of Americans are looking for work. And so while his opposition to the Iraq war animated his early candidacy, it seems almost a secondary issue these days.

During a fund-raising speech in Ohio last week, for instance, Mr. Obama mentioned the Iraq transition only in passing. “We are keeping the promise I made when I began my campaign for the presidency: by the end of this month, we will have removed 100,000 troops from Iraq, and our combat mission will be over in Iraq,” he said, a line he later repeated at a fund-raiser in Miami.

As they mark the moment, Democrats generally make no mention of the troop buildup and strategy change ordered by Mr. Bush in 2007, which many credit with turning around the war and making it possible to end combat now. By the time Mr. Bush left office, he had sealed an agreement with Iraq to withdraw all American troops by the end of 2011. After taking office, Mr. Obama ordered an intermediary deadline of drawing down to 50,000 by the end of this month.

Mr. Bush showed up unannounced at the Dallas-Fort Worth International Airport earlier this month to greet troops returning from Iraq. While no news media were invited, video posted on YouTube by troop supporters showed him in casual clothes shaking hands and posing for pictures with troops as they entered the terminal one by one.

Mr. Bush has declined to discuss the mission change, but former advisers see it as a validation that after all the pain and the blood, Iraq may finally be in a better place, governed by a freer, more democratic system that could yet serve as a model in an otherwise largely authoritarian Middle East.  “We can take a certain measure of satisfaction from the success in Iraq,” L. Paul Bremer III, the former Iraqi occupation administrator, said in an interview. “It’s not a complete success yet, obviously, but building democracy takes time.”  He added that “a successful Arab-Muslim democracy basically puts the lie to the Islamic extremists” who maintain that democracy is anathema to Islam and advocate a harsh form of rule.

Stephen J. Hadley, who was Mr. Bush’s national security adviser, said the current transition was due to the surge ordered by the former president and opposed by Mr. Obama when he was a senator. But he said he was glad that Mr. Obama’s team “has gone through a transition” and that it seemed to be taking pride in accomplishments in Iraq. He said he hoped that the administration would see the task through.  “If they do, they can rightly claim some measure of credit, and I would be the first to give them credit,” Mr. Hadley said. “But they need to stay focused and stay engaged.”

That Obama is basically carrying out the timetable negotiated under his predecessor is simply the nature of peaceful transition in our system.   Few important. things are entirely the work of one president.    Historians will assign Bush some large amount of credit if things do work out well in Iraq, as they have Reagan for the way the Cold War ended, even though it happened on his successor’s watch.   But Obama and his team are steering the ship now and have to make countless decisions on implementing the transition.  So, they’ll get a fair amount of credit, too.

It is, however, interesting how little attention we’re paying to Iraq now, given how charged the issue was from the debates of 2002 all the way through the early part of the 2008 election.  As I’ve noted elsewhere,  I’ve been part of that national trend.  The thing that got me noticed on OTB seven-odd years ago was my coverage of the tail end of the Iraq War debate and its early years.  Discussion of the war was easily my most prolific subject for the first four years or so blogging.  But I’ve hardly paid attention the last 18 months to two years.

That’s a good thing! And, certainly, we’re drawing down to a much better outcome than any of us could have expected in 2006.  But, alas, at a much higher cost in blood and treasure and with a whole lot less Shining Example For The Region than we’d hoped in the giddy days of 2004.  So, we have less “news” to talk about but, at the same time, no “victory” to crow about.  Presumably, the reverse is true from the side of those who opposed the war: Things turned out better than we feared but there’s no steady stream of casualties to point to as vindication for how bad it all is.  And, of course, Bush is gone, removing the lightning rod.