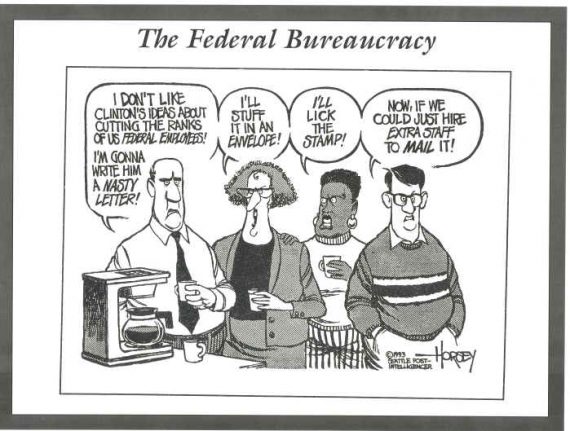 While the federal government has a dedicated workforce that provides a number of essential functions and services to taxpayers, no one would argue that it is a model of efficiency or effectiveness. Indeed, many federal agencies and their core business practices were designed in the 1950s and 1960s. Even agencies that have gone through periods of reinvention remain years behind the private sector in terms of performance and efficiency.

In the past decade, the most competitive and successful U.S. companies have fundamentally transformed how they do business. They have adopted new strategies to cope with a more complex, dynamic and uncertain environment. Many have gone through a process of “delayering” to streamline and empower their organizations. They have leveraged new information technologies to enhance performance, agility and competitiveness while reducing cost. And they have made strategic investments in human capital and talent management to improve performance and foster the next generation of leaders.

While some federal agencies have made good-faith attempts to become more efficient, most still carry the dead weight of unnecessary overhead, outmoded business processes, infrastructure that is no longer aligned to their mission, and underperforming organizational structures.

Anyone who has worked in government does indeed know that there are a lot of inefficiencies. There is a lot of waste and generalized stupidity. But guess what? There is even more of that in the private sector. The notion that the private sector is more efficient generally is simply not empirically supportable.

Whether the issue is health care or, say, private vs. public prisons, there is just no compelling evidence that the private sector is more generally efficient. You’d think it would be. After all, the profit motive ought to generate more efficiency, but the reality is that while corporate management has a fiduciary responsibility to shareholders or owners in principle, in practice management is just as concerned with maximizing its own rewards.

Business justify all sorts of things on “efficiency” grounds. Business class travel and corporate jets supposedly allow managers to be more rested and work on the go and so on, but really it is about comfort and prestige, not efficiency. Lavish retreats supposedly promotes better communication and teamwork, but really is mostly about getting a paid vacation. Expensive office space and furnishings are supposed to reassure clients and set a tone of quality, but really just make more enjoyable places to work. And, of course, outsized salaries for CEOs and other senior managers are supposed to be about attracting top talent, and yet are often divorced from any objective measure of performance.

But Flournoy isn’t saying that the private sector is more efficient at everything; she’s saying government is doing certain things badly and could learn from best practices in the private sector. And, surely, that’s true in many cases.

Let’s look at her specific complaints:

Partly because they’re so large and partly because of the defining nature of bureaucracy, government agencies are slow to adapt. Indeed, they’re often legally constrained from adaptation. Our intelligence community is still largely stuck in 1950s stovepipes, the post-9/11 reforms notwithstanding. And, while the Defense Department is constantly transforming, its overarching organizational structure hasn’t been reformed since 1949.

the most competitive and successful U.S. companies . . .  have gone through a process of “delayering” to streamline and empower their organizations.

The military chain of command remains what it was in 1949. Indeed, we’ve added layers of bureaucracy and have generally upsized command structures, with more four-stars than you can shake a stick at.

They have leveraged new information technologies to enhance performance, agility and competitiveness while reducing cost.

In fairness, government has done this, too. But, for all sorts of reasons, they’re typically way behind business in terms of state-of-the art.

And they have made strategic investments in human capital and talent management to improve performance and foster the next generation of leaders.

I’m a little skeptical of the degree to which this is true. And, at least in the military and intelligence sector, we’ve long made a strategic investment in professional education and training. (Indeed, Finel teaches at the National War College, the crown jewel of this system.) On the other hand, the byzantine civil service personnel system serves to promote existing employees up through the chain rather than to recruit the best available talent. And there’s a wait your turn mentality to the promotion system to a degree that doesn’t exist in the private sector.

While some federal agencies have made good-faith attempts to become more efficient, most still carry the dead weight of unnecessary overhead, outmoded business processes, infrastructure that is no longer aligned to their mission, and underperforming organizational structures.

Again, I’m sure that many private companies do the same thing. Change is hard and expensive. But change is harder in government bureaucracies.

My doctoral dissertation, which I started nearly two decades ago, focused on this very topic. Then, like now, the Defense Department was facing steep budget cuts following a long period of wartime growth. When I started my research, my intent was to write about what the post-Cold War structure should look like. Within a few weeks, though, I discovered that there actually wasn’t much debate about that. The real question, it turned out, was Why aren’t we going to do what every expert thinks we need to do?

In the final paragraphs, Flournoy talks about “rice bowls,” entrenched interest groups with powerful connections in the Pentagon or the Hill, and parochialism. Those are all important. What’s probably even more crucial, though, is that, during times of massive cuts, organizations seek to preserve their core assets even at the expense of known short-term needs.

In the 1990s, the Army knew that it needed more language, civil affairs, special operations, military police, and other skills needed for what it was then calling MOOTWA (military operations other than war). The post-Desert Storm reconstruction mission in Iraqi Kurdistan and the warlord chasing debacle in Somalia were underway and peace enforcement missions in Bosnia and elsewhere were plainly on the horizon and even more plainly unsuited for a tank heavy Cold War force. But the Army was much more concerned being unprepared for a major land war that it couldn’t see than making do with sub-optimal forces for the quasi-wars on its plate. We were several years into counterinsurgency operations in Iraq before real transformation began and by then it was too late—and quite possibly too much. (And we still don’t have the linguists and MPs we need.)

It’s true that many companies in the private sector do a lousy job of changing, too. But they tend to go out of business after a while. That doesn’t happen very often in the government.