Timothy Sandefur argues that President Obama’s plan to expand Americorps into a “a workable, fair, and reasonable mandatory service requirement for all able young people” is “an abrogation of the 13th Amendment” and its prohibition against “involuntary servitude.”

The good news, as an update the Examiner editorial linked above notes, is that the offending language was yesterday stripped from the bill and we’re not likely to pass any such thing.  The bill that passed the Senate yesterday is quite expensive but does not appear to contain any mandatory provisions at all.

Beyond that, however, while I oppose mandatory national service plans — not only for libertarian reasons but because the idea of mandatory voluntarism is as creepy is it is oxymoronic — the case history makes it clear that the Supreme Court has never considered such things to be in violation of the Constitution. A good summary:

The Thirteenth Amendment, unlike most provisions in the Constitution, is self-executing, in that it directly reaches-even without action by Congress- conduct by private individuals (slave holders). Because of this fact, Congress’s power under the Thirteenth Amendment allows it to punish forms of private conduct when it might not be able to do so under an amendment such as the Fourteenth, which restricts the conduct of states (prohibiting states from denying equal protection of the laws or due process).

The Thirteenth Amendment has not produced nearly the volume of Supreme Court decisions as has the Fourteenth Amendment, or even the Fifteenth Amendment (guaranteeing the vote to black citizens). In 1916, in Butler v Perry, the Court rejected a challenge brought by a Florida man to a state law that required all able-bodied men between 21 and 45, when called to do so, to work for up to 60 hours on maintaining public roads. The plaintiff, convicted of failing to put in his time on the roads and sentenced to jail, argued that the law mandated “involuntary servitude” in violation of the Thirteenth Amendment. Justice McReynolds, writing for the Court, concluded “the term ‘involuntary servitude’ was intended to cover those forms of compulsory labor akin to African slavery which, in practical operation, would tend to produce like undesirable results.”

Jones vs Alfred H. Mayer Co. (1968) arose when the developer of a surburban St. Louis subdivision refused to sell Joseph Jones a home because he was black. Jones sued the developer, alleging a violation of the 1866 Civil Rights Act (42 U.S.C. 1982) which granted “all citizens of the United States…the same right as is enjoyed by white citizens…to purchase…real property.” The Court rejected the developer’s argument that Congress lacked the power under Section 2 of the 13th Amendment to ban private discrimination in housing. According to the Court in Jones, so long as Congress could rationally conclude that private discrimination in the housing market was “a badge of slavery,” the statute should be upheld.

Finally, in Memphis v Greene (1981) the Court reversed a 6th Circuit ruling that the closing of a road separating an all-white neighborhood from a predominately black neighborhood constituted a violation of the Thirteenth Amendment. The Court found that the modest inconvenience and speculative loss of property value to black residents was insufficient either to be considered “a badge of slavery” protected against by the Thirteenth Amendment, or a violation of the 1866 Civil Rights Act enacted under the power granted to Congress by Section 2 of the amendment. Four dissenting justices would have found the closing to violate the 1866 Act.

That’s only three cases but it gives us a ruling from three eras, including one at the height of the Warren Court and one well after the Civil Rights movement’s heyday. The bottom line is that the Supreme Court has never been sympathetic to the argument that mandatory but temporary obligations to the state is   tantamount to slavery. 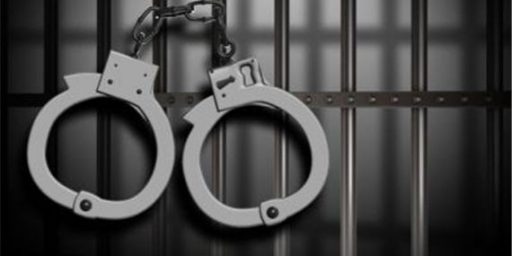 Prison Rape and the 13th Amendment