Jim Tressel Out at Ohio State

Jim Tressel has resigned as head coach of the Ohio State football team. 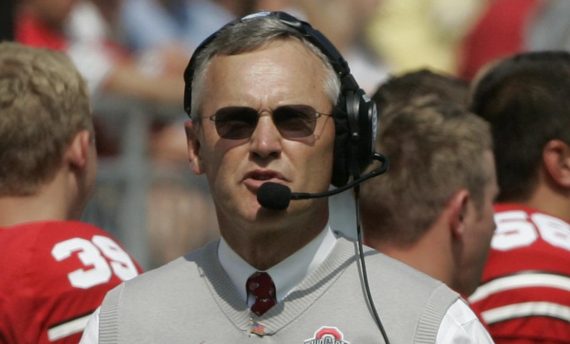 Jim Tressel has resigned as head coach of the Ohio State football team.

Less than three months after President E. Gordon Gee and Athletic Director Gene Smith said they fully supported their embattled coach, mounting pressure, a pending NCAA disciplinary hearing and new revelations about the culture of the program forced the university to act on their once-revered coach, sources said.

Neither Gee, Smith nor Tressel could be reached immediately for comment.

Sources said assistant coach Luke Fickell, who had been named to coach the first five games of the season while Tressel served his suspension for withholding information from the university compliance office and the NCAA, will serve as interim coach of the Buckeyes all of next season.

The Dispatch has obtained a memo Gee sent to OSU trustees this morning:

“I write to let you know that later this morning we will be announcing the resignation of Jim Tressel as head coach of the University’s football program. As you all know, I appointed a special committee to analyze and provide advice to me regarding issues attendant to our football program. In consultation with the senior leadership of the University and the senior leadership of the Board, I have been actively reviewing the matter and have accepted Coach Tressel’s resignation.

“My public statement will include our common understanding that throughout all we do, we are One University with one set of standards and one overarching mission. The University’s enduring public purposes and its tradition of excellence continue to guide our actions,” Gee wrote.

Ohio State’s football program came under fire in December when six players were suspended by the NCAA for selling or trading uniforms and other memorabilia to a Columbus tattoo-parlor owner. The NCAA also drew criticism for allowing the players to participate in the Sugar Bowl instead of serving their suspensions immediately.

He leaves Ohio State with an impressive coaching resume, having led the school to its fifth national title as well as directing impressive runs of Big Ten championships and victories over archrival Michigan.

The coach who came to Ohio State from Division I-AA Youngtown State University leaves OSU as one of the most recognizable figures in college football and all sports with a record of 106-22 at OSU. His winning percentage of .828 was better than the legendary Woody Hayes (.761).

It’s been drip . . . drip . . . drip since this scandal first broke a few months ago. Tressel’s eventual ouster had become inevitable, so his resignation now saves both himself and his program additional agony. It’s a little late in the day to switch coaches but Ohio State is one of the five or six best jobs in the country; they’ll have little trouble finding a good coach.