Yesterday, John McCain announced that he was “honored” to receive the endorsement of Pastor John Hagee, a Texas-based preacher who can probably be most charitably described as “pro-Apocalypse”. McCain lavished praise on him for being “pro-Israel”, but as Sarah Posner (via Matthew Yglesias) points out, what he actually stands for is the destruction of Israel in order to facilitate the End Times.

Comparing Ahmadinejad to Hitler, Hagee argues that Iran’s development of nuclear weapons must be stopped to protect America and Israel from a nuclear attack. Preying on legitimate worries about terrorism, and invoking 9-11, he vividly describes a supposed Iranian-led plan to simultaneously explode nuclear suitcase bombs in seven American cities, or to use an electromagnetic pulse device to create “an American Hiroshima.”

When addressing audiences receptive to Scriptural prophecy, however, Hagee welcomes the coming confrontation. He argues that a strike against Iran will cause Arab nations to unite under Russia’s leadership, as outlined in chapters 38 and 39 of the Book of Ezekiel, leading to an “inferno [that] will explode across the Middle East, plunging the world toward Armageddon.” During his appearance on Hinn’s program at the end of last March, for example, the host enthused, “We are living in the last days. These are the most exciting days in church history,” but then went on to add, “We are facing now [the] most dangerous moment for America.” At one point, Hinn clapped his hands in delight and shouted, “Yes! Glory!” and then urged his viewers to donate money faster because he is running out of time to preach the gospel.

Paging Tim Russert: How about asking McCain if he supports uniting the Arab nations against Israel under the control of Moscow?

In addition to Hagee’s pro-Apocalypse views (and, for the record, let me state that I am anti-Apocalypse), he also has a long, long record of bigotry.

For example, John Hagee is on record as stating that Hurricane Katrina was sent by God to punish New Orleans for hosting a gay pride parade:

All hurricanes are acts of God, because God controls the heavens. I believe that New Orleans had a level of sin that was offensive to God, and they were recipients of the judgment of God for that.

The newspaper carried the story in our local area, that was not carried nationally, that there was to be a homosexual parade there on the Monday that the Katrina came. And the promise of that parade was that it would was going to reach a level of sexuality never demonstrated before in any of the other gay pride parades.

In addition to his antiquated views on meterology and homosexuality, Hagee also has a long history of anti-Catholic bigotry, to the point where he blames the Holocaust on Hitler’s education in Catholic schools. Seriously.

Of course, I suppose that according to Hagee, Hitler was merely doing God’s will:

In “Jerusalem Countdown: A Prelude To war” Hagee has stated that Jews brought the Holocaust upon themselves by rebelling against God and that the Holocaust was God’s way of forcing Jews to move to Israel where, Hagee predicts according to his interpretation of Biblical scripture, they will be mostly killed in the apocalyptic Mideast conflict Hagee’s new lobbying group seems to be working to provoke and which John Hagee believes to be a necessary precondition for the “Rapture” that will lift Christians, but not Jews, bodily into Heaven to enjoy physical immortality amidst paradise.

You heard that right, folks. John Hagee, the man that John McCain is “honored” to have the support of, believes that God is reponsible for the Holocaust.

Look, I understand that a candidate cannot necessarily be held responsible for the thoughts and opinions of their supporters. I am on record as saying that. Nor do I believe that a political candidate has any kind of obligation to repudiate every bad idea of every supporter–that’s mostly a waste of time.

But when a political candidate makes a plane trip to accept the endorsement of a prominent person, in public, and states that they accept that endorsement and are “honored” to do so, I think that speaks volumes about the candidate. I think that John McCain has a lot of explaining to do about what, exactly, is “honorable” about having the support of a pro-Apocalypse, homophobic, anti-Catholic, anti-Semitic, pro-Holocaust bigot. 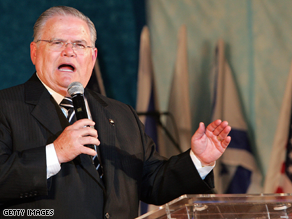