Marine General Peter Pace, chairman of the Joint Chiefs of Staff, told the Chicago Tribune that the ban on gays on the military must be kept because homosexual acts are immoral.

Responding to a question about a Clinton-era policy that is coming under renewed scrutiny amid fears of future U.S. troop shortages, Pace said the Pentagon should not “condone” immoral behavior by allowing gay soldiers to serve openly. He said his views were based on his personal “upbringing,” in which he was taught that certain types of conduct are immoral. “I believe homosexual acts between two individuals are immoral and that we should not condone immoral acts,” Pace said in a wide-ranging discussion with Tribune editors and reporters in Chicago. “I do not believe the United States is well served by a policy that says it is OK to be immoral in any way.

While quite impolitic a thing to say in our current political climate, it’s hardly surprising that Pace finds homosexual acts immoral. He’s a deeply religious man and his views are almost surely shared by not only most of the senior brass but most of the rank-and-file. From a purely rational point of view, though, I’m not quite sure how consensual homosexual acts are akin to adultery, which harms an unwilling third party. Or why they’re any less moral than heterosexual fornication from a Biblical standpoint.

(I also find the use of quotation marks around single words like “condone” and “upbringing” funny. It’s as if the reporter disputes his claim that he had an upbringing.)

Taylor Marsh, noting that the military is now willing to grant waivers for minor crimes in order to meet recruiting quotas, observes, “It says something about our nation that we’d rather recruit thugs than an honorable gay person who wants to serve his or her country.” She has video of Pace’s remarks.

No, I’d say “immoral” is letting our own injured and maimed soldiers sleep in their own urine when you all knew about it and didn’t give a damn. Immoral is lying to the American people in order to get us into a war. Immoral is sending hundreds of thousands of US soldiers into battle without the proper armor. Immoral is risking the lives of our soldiers by still not having a plan for victory or exit.

In fairness, I don’t think Pace is guilty of any of those things. But, certainly, you’d think he’d have bigger things on his mind. Then again, he was simply answering a question; there’s no evidence of which I’m aware that he’s stepping up enforcement.

Pam Spaulding is organizing a letter campaign to force Pace to resign.

Which may be playing into Pace’s hand, according to Jim Henley‘s “Corporal Klinger” theory.

I bet Pace is hoping that the liberal media drive him into retirement. He slips the chain of Iraq dragging him down to the muddy bottom of Posterity Ocean, escapes from having to lead a foolish war against Iran, he can play the victim-of-PC card and have a nice second career as a right wing poster boy, maybe run for Senate on a “Traditional Values and They Wouldn’t Let Me Win the War” platform.

My guess, though, was that he was giving an honest answer to a question. His response is one that wouldn’t have even raised an eyebrow ten years ago.

It should be noted, too, that Pace didn’t say “I hate gays” or even “gays are immoral” but rather that homosexual conduct is immoral. Like it or not, that’s probably where most religious Americans–which is to say most Americans–are. That’s rapidly changing, owing to positive portrayal of gays in the popular culture and more “out” gays in society, but Pace’s remarks hardly make him a leftover bigot from a bygone era.

Now, more than ever, the military is a traditional society. It’s all-volunteer, so its membership is self-selected. It’s also disproportionately Southern and rural. Institutionally, morality, honor, and traditional values are highly touted, taught during the earliest training and selection phases, and reinforced throughout one’s career. (Although situational deviations are permissible. Use of prostitutes when assigned to hardship tours in Korea, for example, is not frowned upon.) That’s not going to change any time soon.

At the same time, soldiers live in and are drawn from the society at large. As homosexuality becomes more normalized in the general culture, young recruits and young officers will come in with those attitudes. (Although, again, there will be a lag because of the traditional orientation of those drawn to military service.) It won’t happen overnight, though.

UPDATE: Pace has issued a statement expressing regret for expressing his personal views but not apologizing for them.

In a statement Tuesday, he said he should have focused more in the interview on the Defense Department policy about gays — and “less on my personal moral views.” He did not offer an apology, something that had been demanded by gay rights groups.

Good. I’m getting tired of insincere apologies from politicians, sports stars, and other high profile figures. The man said what he meant and he should stick by it. 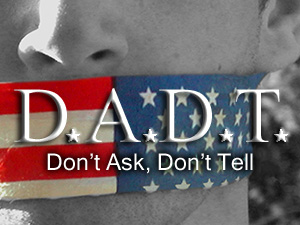