Karen Hughes is making huge strides in improving America’s public diplomacy, according to a page 15 story by WaPo’s Glenn Kessler.

Seven months ago, Undersecretary of State Karen P. Hughes began her job to improve the United States’ “public diplomacy” with an ill-fated splash — a “listening tour” of the Middle East that earned negative reviews from the Arab media and catcalls from domestic critics. But since that diplomatic debut, Hughes has managed to set in motion substantial changes in the ways an often lumbering government bureaucracy reacts to the swirl of news, gossip and rumors that make up today’s 24-hour news cycle.

Hughes’s efforts include such innovations as a presidential campaign-style “rapid response” unit that monitors Arabic newscasts and then distributes early-morning summaries. Previously, the government produced 14 disjointed reports, which came out 24 to 48 hours after news appeared overseas. By then the response was stale. Now, a team of people who speak Arabic and other languages monitors news reports by computer and on large flat-screen TVs, producing an instant report on the “hot issues” overseas and suggested messages to counter the bad news.

She has created new senior-level posts, placing a deputy assistant secretary responsible for public diplomacy in every regional bureau of the State Department. This gives her bureaucratic tentacles into the key offices of the building, where many policies are developed. She said “mistakes were made” when the old U.S. Information Agency was merged into the State Department seven years ago, creating her office but leaving few links with officers in the field. “One of the things we have tried to do is reestablish those management links,” she said.

This is quite a pleasant surprise. The punditocracy, myself included, were quite skeptical when Hughes was appointed to this post.

One wonders, however, whether a story about what a lousy job Hughes was doing would be buried on page A15 . . . 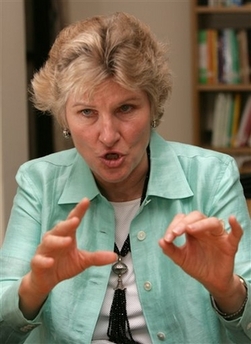