Players from the Los Angeles Clippers chipped in to pay for the surgery of assistant coach Kim Hughes back in 2004. It's been a secret until now. 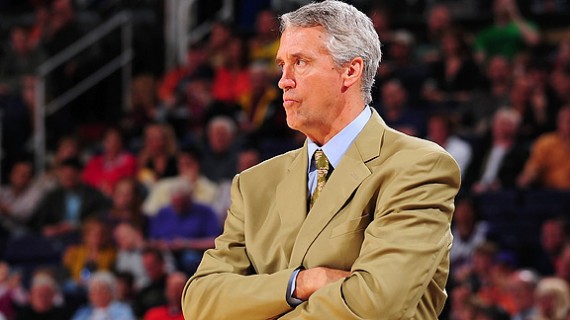 Players from the Los Angeles Clippers chipped in to pay for the surgery of assistant coach Kim Hughes back in 2004. It’s been a secret until now.

Former Los Angeles Clippers coach Kim Hughes is used to helping players, but it was players who stepped up for him in his time of need.

In September 2004, while he was a Clippers assistant, Hughes was diagnosed with prostate cancer. He was premed at Wisconsin, so he had an idea what he was up against. His doctor told him that he could wait a few months for surgery, but the team was preparing for training camp and he didn’t want to miss a chunk of the season recuperating. So Hughes went for a second opinion and found a doctor that would do the surgery a week later.

“But he wasn’t covered under my insurance plan,” Hughes told ESPNLosAngeles.com. “We had a certain group of doctors we could go to. So if I elected to use him, it’d be out of my pocket. “[The Clippers] didn’t talk to me directly about it. They told, I believe my agent, that the reason they couldn’t pay for the surgery is if they paid for mine, if anybody else had a problem — head coach, secretary, assistant coach — if they paid for mine, the onus would be on them for everybody else. I said, ‘That’s fine. I choose to try and save my life, and if I have to pay for it myself, I will.'”

Then coach Mike Dunleavy, who had recommended the new doctor, mentioned Hughes’ plight to some players.

“Kim was one of our coaches and he’s a really good friend of mine, too,” Maggette said, according to the Journal Times of Racine, Wis. “He was in a situation where the Clippers’ medical coverage wouldn’t cover his surgery. I thought it was a great opportunity to help someone in need, to do something that Christ would do. It shows your humanity, that you care for other people and not just yourself. Kim was in a life-and-death situation.”

Hughes’ desire to get the surgery over with quickly proved to be a smart move. The cancer had progressed and was threatening other parts of his body. “Normally it’s a very slow-growing cancer,” Hughes told ESPNLosAngeles.com, adding that his father and twin brother also had prostate cancer. “It’s one of the slowest, but mine was caused by genetic factors and it was a very aggressive and fast-spreading cancer.”

Hughes had his entire prostate removed and didn’t miss training camp, thanks to the players.

“Those guys saved my life,” Hughes said, according to the Journal Times. “They paid the whole medical bill. It was like $70,000 or more. It wasn’t cheap. It showed you what classy people they are. They didn’t want me talking about it; they didn’t want the recognition because they simply felt it was the right thing to do.”

Maggette, who now plays for the Bucks, said that Hughes thanks him every time they see each other. “I’ve said to him, ‘Kim, come on. You don’t have to do that. You’re good,’ ” Maggette said, according to the newspaper. “It just shows you what kind of person he is, to keep thanking me all the time for that. Like I said, it was just my time to serve another human being. I think if anyone on my team is in that kind of situation, I would try to help him out if I could. That’s just the person I am. I was raised that way.”

Hughes, who took over for Dunleavy last season but was not brought back by the Clippers, said that the players showed that you can’t judge an NBA player by the flashy exterior. “Corey is perceived by some people as not being a good person because he seems to be aloof and arrogant,” Hughes said, according to the newspaper. “But they don’t know him. He’s a good man; he’s a great man. You can have all the money, all the success, all that stuff, all those so-called important things in life, but in the end, you’re judged by what you did for your fellow man. Corey will always be an important part of my life. What he and those other guys did for me put things in perspective.”

With a lockout underway in the NFL and one looming in the NBA, we could use a feel-good story in the world of sports.

On the less feel-good side, you’d think a lucrative professional sports franchise could afford decent health insurance for its employees. And $70,000 is actually cheap when it comes to surgery.

So, The Owner Of The L.A. Clippers Is A Racist