Karl Rove may take his American Crossroads SuperPACs into Republican Primary campaigns, where a clash with Tea Party forces would seem inevitable:

Rove is pondering new missions for Crossroads to address weaknesses laid bare by the GOP’s back-to-back failures to win the White House and the fact that the party fell short when expected to win back the Senate.

Where until now it battled only in general elections and against Democrats, Crossroads is considering whether to start picking sides in Republican primaries. The idea would be to boost the candidate it deems most electable and avoid nominating the kind of flawed and extreme ones who cost the party what should otherwise have been easy Senate wins in Florida, Missouri and Indiana.

That, however, could put Crossroads at odds with the tea party and other groups that devote their energies to promoting the most ideologically pure contenders.

It would be an interesting thing to see, wouldn’t it? Get the popcorn ready. 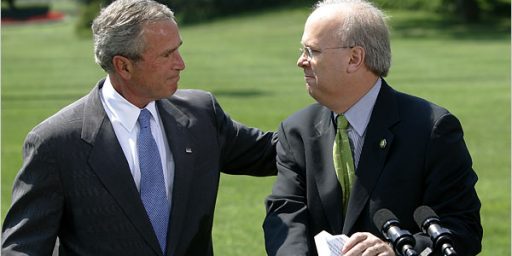 Karl Rove Suddenly Discovers That The National Debt Is A Problem

Did Anyone Commit a Crime in Plame Game?