Democratic Party leaders said Wednesday they want to know why Sen. John Kerry ended his presidential campaign with more than $15 million in the bank, money that could have helped Democratic candidates across the country. Some said he will be pressured to give the money to Democratic campaign committees rather than save it for a potential White House bid in 2008. “Democrats are questioning why he sat on so much money that could have helped him defeat George Bush or helped down-ballot races, many of which could have gone our way with a few more million dollars,” said Donna Brazile, campaign manager for Al Gore’s 2000 presidential race.

Brazile is a member of the 400-plus member Democratic National Committee, which meets early next year to pick a new party chairman. One high-ranking member of the DNC, speaking on condition of anonymity, said word of Kerry’s nest egg has stirred anger on the committee and could hurt his chances of putting an ally in the chairmanship.

Congressional Democrats and labor leaders also privately questioned Kerry’s motives. One said he would personally ask the Massachusetts senator to donate some of the money to the Democratic House and Senate campaign committees. Three former Kerry campaign aides, also demanding anonymity out of concerns about alienating their former boss, said they were surprised and disappointed to learn that he left so much money in the bank.

Kerry had roughly $45 million left in his primary campaign fund as of mid-October, according to his Federal Election Commission report, and could use that as seed money for another presidential bid.

While I don’t think Kerry lost because he didn’t spend enough money–indeed, he spent more than any candidate in history–this is most peculiar indeed. Kevin Drum can’t explain it, either. 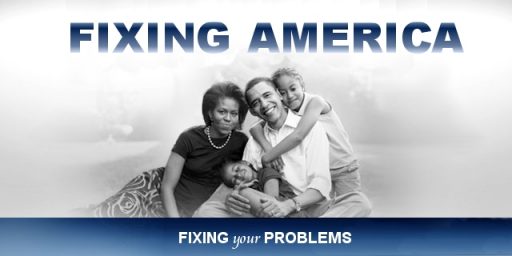 Democrats Claim Obama Broke Their Party, Call on Him to Fix It