In their first year as an NHL expansion team, the Las Vegas Golden Knights have managed to do something that's only been done once before in any of the 'big four' professional sports leagues in the United States. 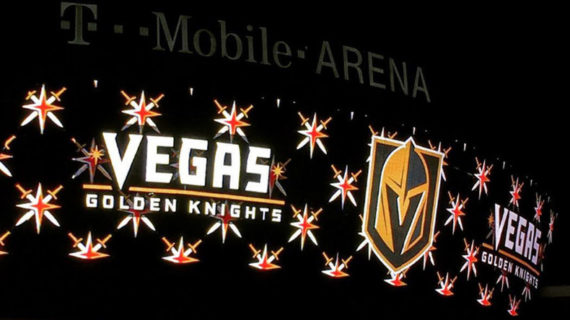 For only the second time in nearly sixty years, an expansion team has made the final round of the playoffs in a major American sports league, and it turns out to be a team that plays on ice from a city surrounded by desert terrain:

LAS VEGAS — As the Vegas Golden Knights swarmed Marc-Andre Fleury inside his crease at Bell MTS Place in Winnipeg, one of his most fervent supporters hoisted a sign amid a raucous fete back in Las Vegas.

Standing mere feet from a stage at the team’s official watch party, Paul James, a former air traffic control specialist at McCarran Airport, celebrated with a bevy of cheerleaders, thousands of fans and the team’s eponymous Golden Knight mascot, who waved a shiny rapier in triumph. The sign read: “Pouvoir Des Fleury” or “Flower Power,” underlining the acrobatic goaltender’s magnetic appeal to the team and city.

On Sunday, Fleury led the Knights to a 2-1 victory over the Winnipeg Jets, capping an improbable and amazing journey through the Western Conference playoffs. Over the series’ five games, Fleury constantly repelled a talented Jets lineup that included the imposing forward Mark Scheifele and the sharpshooter Patrik Laine.

With the victory, the Golden Knights joined the 1967-68 St. Louis Blues as the only expansion teams since 1960 in the N.H.L., N.B.A., M.L.B. and N.F.L. to earn a spot in a championship round during their inaugural seasons.

The Knights’ run to the finals is a remarkable achievement by any measure. Before the conference finals even started, the Knights were one of just three teams in N.H.L. history to win multiple playoff series in their inaugural season. The Toronto Arenas accomplished the feat in 1918 and the Blues advanced to the finals in their first year, when the N.H.L. doubled in size from the Original Six. The Blues were the beneficiary of a favorable playoff bracket that ensured an expansion team would receive a spot in the finals.

Other teams have had early success, but not in their inaugural seasons. The Florida Panthers made it to the Stanley Cup finals in 1995-96, their third year of existence, and lost to the Colorado Avalanche. In other professional sports, the Milwaukee Bucks captured the 1971 N.B.A. title three years after entering the league, and the Arizona Diamondbacks won the 2001 World Series in their fourth season. Both teams were led by big stars — the Bucks by Kareem Abdul-Jabbar (known as Lew Alcindor at the time) and the Diamondbacks by Randy Johnson and Curt Schilling — who intimidated opponents with their brute strength and power. By contrast, the Knights are led by gritty, diminutive players, such as Jonathan Marchessault, the undrafted forward who appeared in 150 games in the American Hockey League before making his N.H.L. debut.

I’m not really a hockey fan, and haven’t followed the seemingly endless NHL playoffs at all, but this is nonetheless a fairly remarkable achievement. In most cases, it takes an expansion team at least a few years to get their act together to become real contenders even if they were able to take advantage of a favorable draft that allowed them to pick up top players in their inaugural and early seasons. I’m not entirely familiar with the process by which the Golden Knights were allowed to sign players. From the descriptions I’ve read, though, it doesn’t seem as though they were given overly favorable treatment in that respect, and that their success comes as something of a surprise to sports writers and fans alike. In any case, the Golden Knights will face either the Tampa Bay Lightning or the Washington Capitals in the Stanley Cup finals. Right now, Tampa leads that series 3 games to 2 and would secure a ticket to the finals with a win tonight. If Washington wins, then the deciding game seven will be on Wednesday. Whatever the final outcome, though, the big story of the finals will most likely be the first-timers from Las Vegas. Win or lose, they’ve already made a mark.

The success of the Golden Knights also comes at a time when the Las Vegas is set to become a player in professional sports in a way that hasn’t been seen before. The Oakland Raiders will be moving to Las Vegas in either 2019 or 2020 depending on when the stadium being built there is available, for example, and there has been discussion of an expansion NBA team and either an expansion or relocated Major League Baseball team in recent years as well. With the success that the Golden Knights are seeing, that talk seems likely to turn into action in the future.