A defense attorney representing Awad Hamed al-Bandar, one of Saddam Hussein’s co-defendants, was abducted yesterday after a court appearance.

Masked gunman yesterday kidnapped a lawyer who had appeared in court a day earlier to represent one of Saddam Hussein’s co-defendants, sparking fears that defense attorneys have become targets of revenge attacks by Shi’ite and Kurdish militias. Saadoun Sughaiyer al-Janabi was seized from his Baghdad office yesterday evening, police said. Mr. al-Janabi was one of two attorneys for Awad Hamed al-Bandar, one of seven Ba’ath Party officials being tried with Saddam in the 1982 massacre of Shi’ite Muslims in a town near Baghdad. Al-Bandar was the chief judge of the court that sentenced at least 143 Shi’ite villagers to death. Mr. al-Janabi appeared with 12 other defense lawyers on the opening day of Saddam’s trial Wednesday.

The kidnappers arrived yesterday evening at Mr. al-Janabi’s office in the Sunni-Muslim area of Adamiyah in Baghdad, which had been — and largely remains — a stronghold of Saddam loyalists. It was the site of Saddam’s final public appearance, in which he was videotaped shaking hands with crowds shortly before U.S. forces ousted him in April 2003.

Until Mr. al-Janabi’s kidnapping, fear of retaliatory attacks had mostly affected the prosecution team, the judges and potential witnesses. The names of the chief judge, a Kurd, and the top prosecutor, were not disclosed until Wednesday, and the identities of other judges and prosecutors remain secret. The judge recessed the trial for six weeks, in part to arrange protection for witnesses, many of whom are too frightened to testify.

With yesterday’s kidnapping, defense lawyers have become targets as well.

Chilling, to be sure. Such brazen intimidation of participants in high profile criminal trials is the stuff of American movies but thankfully rather rare in reality. In a country struggling to establish basic law and order, though, it shouldn’t be particularly surprising.

A defense lawyer in Saddam Hussein’s mass murder trial has been found dead, his body dumped near a Baghdad mosque with two gunshots to the head, police and a top lawyers union official said Friday. 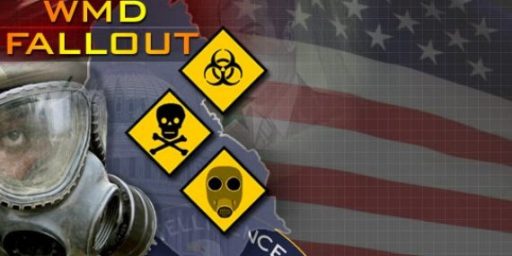