Or, more accurately, she withdrew from the race to be leader of the Conservative Party, which would have lead to her being PM had she won.

The BBC reports:  Theresa May set to be UK PM after Andrea Leadsom quits

In a speech earlier on Monday setting out her leadership campaign platform, Mrs May – who rejected the argument that the next leader and prime minister had to have been someone on the winning side of the EU referendum – said: “Brexit means Brexit and we’re going to make a success of it.”

In her brief statement in Westminster, Mrs Leadsom – who was a leading light of the Brexit campaign – said a nine-week leadership campaign at such a “critical time” for the UK would be “highly undesirable”.

Leadsom’s comments about motherhood, and the associated backlash, appears to have played a significant role in her withdrawal:

A source close to the energy minister told BBC political editor Laura Kuenssberg “the abuse has been too great” for Mrs Leadsom during the contest.

Mrs Leadsom had apologised to Mrs May on Monday after suggesting in a weekend newspaper interview that being a mother made her a better candidate for the job.

More on May here: Tory contender: Theresa May 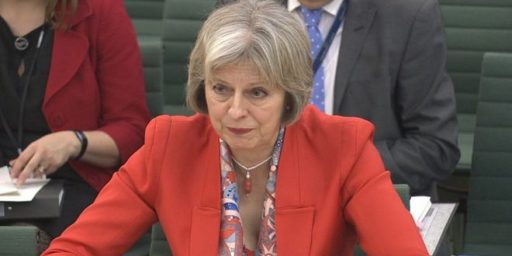