Howard Dean imploded on national television last Tuesday, has been the butt of jokes all over America, and is outpolling Lieberman by a factor of five.

Wesley Clark is apparently sharing brain waves with Dennis Kucinich, has been campaigning for a tiny fraction of the time, is named “Wesley,” and has managed to double Lieberman’s totals.

Suspending? What, he’s hoping all the candidates able to break the single digits will die? 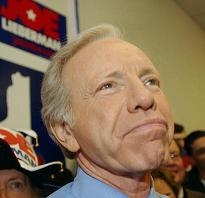