A seeming non-story posted in the Washington Times‘ blog is getting a surprising amount of attention in the blogosphere.

A question for President Bush on immigration rose up like a ghost from the grave this afternoon in Ohio. Only the questioner was a 13-year old blonde-headed girl, Jessica Hackerd, from Brecksville, Ohio, who immediately broke into tears after making her inquiry.

“Mr. President, I know immigration has been a big problem in the U.S. And what is your next step with the immigration bill?” Jessica asked Mr. Bush, during a question and answer period after a speech Mr. Bush gave to a Cleveland business group.

Mr. Bush’s sarcastic reply — a wry “yeah, thanks” — drew laughter from the crowd of 400. But the attention caused young Jessica, who characterized herself in an interview afterward as very shy, to immediately tear up.

“No, it’s a great question. No, I appreciate that,” Mr. Bush said, as he saw Jessica’s reaction.

The story goes on to note that the kid was ridiculously nervous and how much the president went out of his way to thank her and meet with her and her parents afterwards. It’s rather clear to me that Bush was trying to make light of an obviously controversial topic before launching into a serious answer.

Michelle Malkin: “Do you think there’s anyone in the White House who might possibly realize that it’s precisely this flippant attitude that has turned off so many grass-roots conservatives and eroded the president’s political capital when he needs it the most?”

So, the reason the base turned against Bush for actually trying to implement policies that he campaigned on in both 2000 and 2004 is because he is too snarky? So, if he’d been a little nicer in promoting SHAMNESTY! for the evil Mexican hordes invading our nation, destroying our culture, taking our jobs, and providing safe passage for al Qaeda, things would have worked out differently? 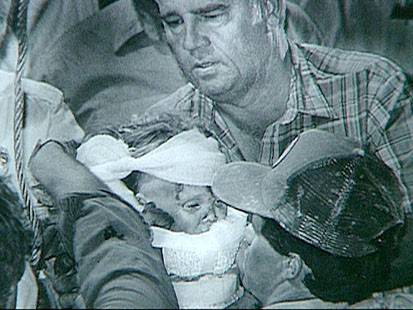