Lyn Nofziger, a longtime advisor to Ronald Reagan, has died of cancer at the age of 81

Nofziger had a long and colorful political career, serving California’s two leading Republican politicians of the 1970s and 1980s, Reagan and Richard Nixon. He is perhaps most famous for announcing that Reagan had been shot. Watergate figure John Dean claims that Nofziger helped Nixon compile his “enemies list.”

The AP report reminds us that Nofziger was not the typical Washington figure. 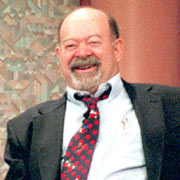 Asked why he was leaving the White House, Nofziger replied, “I don’t like government, it’s just that simple.” He denied as “99 percent untrue” a report he’d quit because of his exclusion from the president’s innermost circle.

His determined irreverence extended to the Reagans. “I’m not a social friend of the Reagans,” he told an interviewer. “That’s by their choice and by mine. They don’t drink enough.” Bombay gin, outrageous puns and fierce loyalty to Reagan and conservative Republican principles were Nofziger hallmarks. His caustic wit made him a favorite among some reporters who covered Reagan as governor and president and on his various campaigns.

In a town where men wear expensive suits, Nofziger stood out in his rumpled sports coats and slacks. His trademark was a tie with a picture of Mickey Mouse, a visual statement of what he thought about Washington. When Reagan won the White House, Nofziger refused to join other aides in calling their boss “Mr. President.” To him, Reagan was always “Ronnie.”

WaPo puts its obituary, by Martin Weil, on page B6, reflecting how long Nofziger has been out of the limelight. He reminds us of the incident for which Nofziger will be most remembered:

Although it is the traditional role of staff members to remain in the background, on at least one occasion Mr. Nofziger found the public spotlight unavoidable. In 1981, John W. Hinckley Jr. shot Reagan outside the Washington Hilton hotel. In the chaotic moments that followed the assassination attempt, some other presidential aides had sought to minimize the extent of the president’s wounds. But Mr. Nofziger, with a reputation for being almost caustically plainspoken, provided the unvarnished facts at an early briefing. “Being an old reporter, I was there, and I’d found some paper,” he said.

It was Mr. Nofziger who relayed to an anxious public the quips made by Reagan as he lay grievously wounded. Mr. Nofziger said this came about almost by accident. “I finished the press briefing and I turned to walk away. And somebody in the audience asked, ‘Did Reagan have anything to say?’ And I said, ‘Oh my goodness, I forgot.’ ” And he then went on to relate the remarks, including the reference to failing to duck, that became part of the president’s legend.