Man Shot by Police at Altercation at Animal Shelter

Dothan police officer shot and injured a man during an altercation outside the Dothan City Animal Shelter Tuesday afternoon.

The shooting occurred after an officer responded to a disorderly conduct complaint at the animal shelter located on Jerry Drive at around 12:30 p.m., Dothan Police Sgt. Maurice Eggleston said.

Robert Lawrence, a sovereign citizen, was attempting to turn over a stray animal, he said. Lawrence became disorderly after he was told he couldn’t leave the animal without producing identification.

“After repeatedly being told to calm down, Lawrence was advised he was being placed under arrest,” Eggleston said. “A physical altercation ensued, to which Lawrence was shot in the abdomen.”

Lawrence later died from his wounds.

In addition to being a “sovereign citizen” (i.e., one who does not recognize the government’s legitimate role over things like ID) Lawrence also had a protection orders issued against him by two women with whom he had children.

I must confess general agreement with Nick Gillespie assessment at Reason:

The details above (including the whole “sovereign citizen” business) paint a brief but compelling portrait of an preternaturally angry man who would not be slow to talk back to cops or escalate a confrontation.

Yet that explains very little, especially when there’s a dead body on the floor. Leaving aside the bizarre (to me, anyway) requirement that you show a government I.D. to drop off a stray cat anywhere, this is a major WTF: If cops can’t defuse this sort of situation peacefully—or with something well short of lethal violence—they don’t deserve to be wearing badges.

The reports do not detail exactly what Lawrence did, or exactly how the situation escalated to an arrest, so perhaps there are facts that would clarify the situation.  Still, based on what has been reported it is difficult to understand how dropping off a stray cat culminates in a dead body.  It certainly does seem to be yet another example that raises questions about the ability of some members of law enforcement to deal with low level offenses. 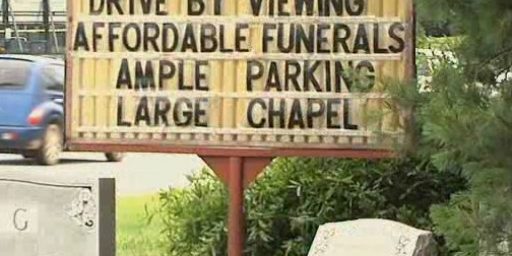