After "seven minutes of terror" the Curiosity rover is already sending back pictures from the surface of Mars. 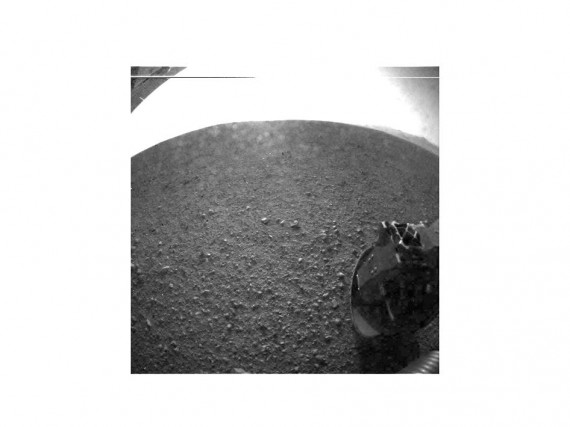 In the end, the “seven minutes of terror” turned out to be not so terrifying at all and NASA was able to successfully land its latest and most ambitious roving science laboratory on the surface of Mars:

PASADENA, Calif. — In a flawless, triumphant technological tour de force, a plutonium-powered rover the size of a small car was lowered at the end of 25-foot-long cables from a hovering rocket stage onto Mars early on Monday morning.

The rover, called Curiosity, ushers in a new era of exploration that could turn up evidence that the Red Planet once had the necessary ingredients for life — or might even still harbor life today. NASA and administration officials were also quick to point to the success to counter criticism that the space agency had turned into a creaky bureaucracy incapable of matching its past glory.

“If anybody has been harboring doubts about the status of U.S. leadership in space,” John P. Holdren, the president’s science adviser, said at a news conference following the landing, “well, there’s a one-ton, automobile-size piece of American ingenuity, and it’s sitting on the surface of Mars right now.”

No other nation has yet to successfully land a spacecraft of any size on Mars. For NASA, it was the seventh success in eight chances.

Curiosity is far larger than earlier rovers and is packed with the most sophisticated movable laboratory that has ever been sent to another planet. It is to spend at least two years examining rocks within the 96-mile crater it landed in, looking for carbon-based molecules and other evidence that early Mars had conditions friendly for life.

As the spacecraft carrying the Curiosity sped toward its destination on Sunday, the pull of Mars’s gravity accelerating it to more than 13,000 miles per hour, NASA officials tried to tamp down concerns that a crash would entirely derail future plans.

“A failure is a setback,” said Doug McCuistion, the Mars exploration program director. “It’s not a disaster.”

Meanwhile, mission managers warned that glitches with interplanetary communications could leave them not knowing Curiosity’s fate for hours or days. They emphasized that, while the planning, testing and design had been careful and methodical, any attempt to land on Mars carried the risk of failure.

“These things are really hard to do,” Mr. McCuistion said.

The Curiosity landing seemed particularly risky. Engineers chose not to use the tried-and-true landing systems, neither the landing legs of the Viking missions in 1976 nor the cocoons of air bags that cushioned the two rovers that NASA placed on Mars in 2004. Those approaches, they said, would not work for a one-ton vehicle.

Instead, for the final landing step, they came up with something novel that they called the sky crane maneuver. The rover would be gently winched to the surface from a hovering rocket stage.

As the drama of the landing unfolded, each step proceeded without flaw. The capsule entered the atmosphere at the appointed time, with thrusters guiding it toward the crater. The parachute deployed. Then the rover and rocket stage dropped away from the parachute and began a powered descent toward the surface, and the sky crane maneuver worked as designed.

Two minutes later, the first image popped onto video screens — a grainy, 64-pixel-by-64-pixel black-and-white image that showed one of the rover’s wheels and the Martian horizon. A few minutes later, a clearer version appeared, and then came another image from the other side of the rover.

“That’s the shadow of the Curiosity rover on the surface of Mars,” Robert Manning, the chief engineer for the project, gushed in awe.

The photo above was taken shortly after that first one with one of the rover’s rear-facing cameras. Still somewhat grainy but we should be getting clearer, and color, pictures by the end of this week along with video at some point. Curiosity will spend most of its operational time exploring Gale Crater, a large crater on the Martian surface that is believed to expose several layers of Martian strata, which would give scientists an opportunity to search soil far deeper than we have ever been able to and possibly find evidence of microscopic life that exists, or existed at one time, on Mars. The crater also has the unusual feature of a 15,000ft mountain in its center, which isn’t something one typically sees in an impact crater. Curiosity will also investigate the mountain in an effort to find some clue as to its origin.

NASA released this statement shortly after the successful landing:

PASADENA, Calif. — NASA’s most advanced Mars rover Curiosity has landed on the Red Planet. The one-ton rover, hanging by ropes from a rocket backpack, touched down onto Mars Sunday to end a 36-week flight and begin a two-year investigation.

The Mars Science Laboratory (MSL) spacecraft that carried Curiosity succeeded in every step of the most complex landing ever attempted on Mars, including the final severing of the bridle cords and flyaway maneuver of the rocket backpack.

“Today, the wheels of Curiosity have begun to blaze the trail for human footprints on Mars. Curiosity, the most sophisticated rover ever built, is now on the surface of the Red Planet, where it will seek to answer age-old questions about whether life ever existed on Mars — or if the planet can sustain life in the future,” said NASA Administrator Charles Bolden. “This is an amazing achievement, made possible by a team of scientists and engineers from around the world and led by the extraordinary men and women of NASA and our Jet Propulsion Laboratory. President Obama has laid out a bold vision for sending humans to Mars in the mid-2030’s, and today’s landing marks a significant step toward achieving this goal.”

Curiosity landed at 10:32 p.m. PDT Aug. 5, (1:32 a.m. EDT Aug. 6) near the foot of a mountain three miles tall and 96 miles in diameter inside Gale Crater. During a nearly two-year prime mission, the rover will investigate whether the region ever offered conditions favorable for microbial life.

“The Seven Minutes of Terror has turned into the Seven Minutes of Triumph,” said NASA Associate Administrator for Science John Grunsfeld. “My immense joy in the success of this mission is matched only by overwhelming pride I feel for the women and men of the mission’s team.”

As did the President:

The successful landing of Curiosity – the most sophisticated roving laboratory ever to land on another planet – marks an unprecedented feat of technology that will stand as a point of national pride far into the future. It proves that even the longest of odds are no match for our unique blend of ingenuity and determination.

Tonight’s success, delivered by NASA, parallels our major steps forward towards a vision for a new partnership with American companies to send American astronauts into space on American spacecraft. That partnership will save taxpayer dollars while allowing NASA to do what it has always done best – push the very boundaries of human knowledge. And tonight’s success reminds us that our preeminence – not just in space, but here on Earth – depends on continuing to invest wisely in the innovation, technology, and basic research that has always made our economy the envy of the world.

And here’s video of the control room at the Jet Propulsion Laboratory as they waited for news of Curiosity’s fate:

Who says engineers don’t get excited?

Seriously, we’ve basically taken a rover the size of an SUV and weighing one ton, and we landed it successfully on the surface of another planet. A fantastic achievement. Now, let’s see what it tells us over the next several years.